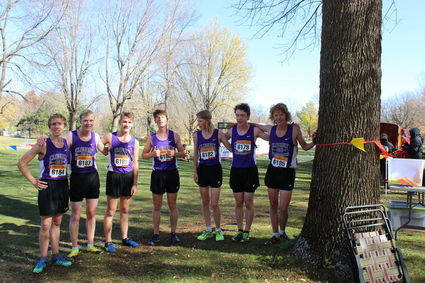 The Section 7AA cross country meet in Princeton last Thursday was a unique experience for the many veteran varsity runners on the Cloquet High School boys and girls cross country teams this year.

Instead of lining up with runners from 15 other schools for a mass start to one of the biggest races of the year, they raced against three other teams, with multiple races taking place throughout the day. Each team crowded into a white box painted on the grass, to maintain proper social distancing from other teams during the Covid-19 pandemic. Additionally, the lure of the state meet was missing this year, because Minnesota State High School League board members have so far voted to not hold any post-section competitions for fall sports, again because of the possibility of spreading the coronavirus.

"Sections for us felt like a race like any other year. It was on the same course as years past," Lumberjacks head coach Chandra Allen said. "Yes, there were less teams during the race, but there were fans, so that helped."

In the end, the Cloquet boys team placed fifth at sections this year - after taking second last year, but graduating top runner Jordan Allen - and the girls team came in 11th place, both in a field of 15 teams. Sophomore Miles Fischer was the top individual runner for Cloquet, placing 12th in the boys race with a time of 16 minutes, 56.2 seconds, a finish that would have sent him to state in a normal year.

The top individual runner on the girls team was senior Lauren Cawcutt (aka Sertich), who took 34th place in the girls race with a time of 21 minutes, 25.8 seconds, followed by junior Amelia Allen in 47th place in 21:52.8, freshman Victoria Nelson in 58th place, freshman Mary Kayser in 61st place, sophomore Charlotte Ripp in 65th place, and freshman Madysen Waters in 76th place.

The girls team, in particular, was affected by injuries, Allen said.

Their top runner, Harmony Tracy, did not race at sections because of an injury, and Amelia Allen has been running with a broken toe since July. 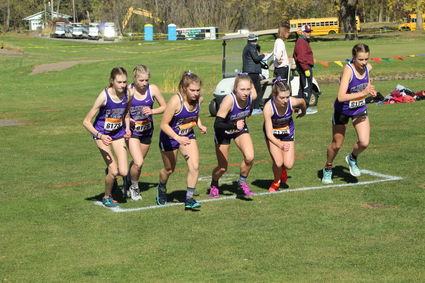 The Cloquet girls finished 11th at the section meet after starting at a designated and staggered spot on the course. The team dealt with injuries this season.

"These two girls were our top performers last year, both qualifying for state," coach Allen said.

The team graduates a number of seniors, but returns a solid core of younger runners, many who made great improvements over the season, cutting off minutes from their previous 5K times, according to the coach.

"We will be looking to those runners continue improving and gain confidence in themselves and their racing abilities," Allen said.

Returning boys next year from the top 10 this year will be Fischer, Mertz, Buytaert, Prosen, Ben Sanders and Alex Zeegan. On the girls side they will return Tracy, Allen, Nelson, Ripp, Kayser, Waters and Erin Loeb.

"The great thing about running is that anyone who puts in the work in the summer months has a shot at running varsity in the meets," the head coach said. "You never know who will surprise you each year."