Lumberjacks go 3-0 with romp over Rails 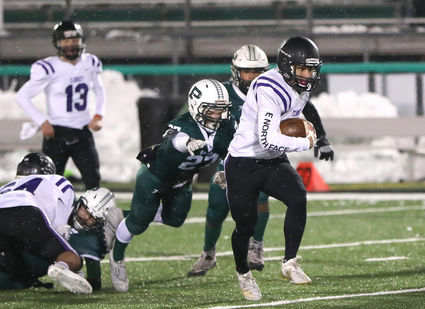 Cloquet's Damian Diver gets away from Proctor's Nathaniel Onken during a carry in Friday night's football game in Proctor.

The Cloquet football team continues to dominate locally after notching another impressive win Friday, this time by throttling Proctor 58-13. With an offensive line that is smart, big and nasty and an abundance of fast and athletic backs, the Lumberjacks are a formidable opponent for any team they play this season.

"The offensive line continues to get better and better this year," said head coach Tom Lenarz. "The fun thing for me is that they are all students of the game and have clearly spent some time learning our 'language.' As a result we are able to make adjustments in the game that in other years we just cannot make. Having a deeper understanding of the offense allows for lots of flexibility."

The backfield, which one could now call the "Lumberbacks," followed the beef up front to the tune of 374 rushing yards and 176 passing yards for a total of 550 yards of offense against the Rails.

"The physical play has been fun to watch as well," said Lenarz. "These guys really like to get after people. We have great senior leadership in this group and it shows on the field."

Damian Diver led the offensive charge with 118 rushing yards, Marshall Hayes added 78 and Deeken Fjeld finished with 74 rushing yards. Both Diver and Hayes each had two touchdowns in the game.

'We are blessed to have several guys with game-breaking ability," Lenarz said. 'Schools our size don't always have this kind of depth at the skill positions, so I would guess deciding how to stop us would be difficult this year."

In the passing department, quarterback Alec Turnbull was 5 for 7 - good for 133 yards - while Reese Sheldon had 86 receiving yards and Will Turnbull added 47 receiving yards.

As good as the offense has been, the defense has been equally impressive with the first-team defense not allowing a point to the Rails. The only scores came late in the game. 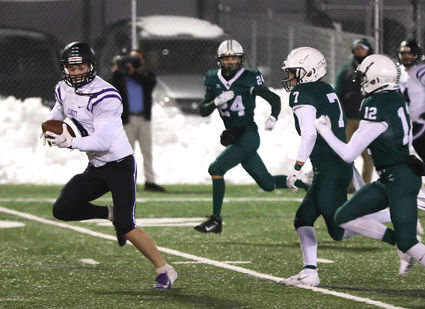 "Overall team speed is a strength for us and this shows on defense as well as offense," Lenarz said. "Coach Ojanen and the defensive coaches have done a great job of putting kids in the right places. Allen Rengo made a tackle for a loss on Friday on fourth and one that people could hear in the stands. People outside the game probably are not aware how hard that is to do and how rarely it happens in high school football. It was a great play! I would say that he and Jack Sorenson really do a great job of setting the tone on that side of the ball."