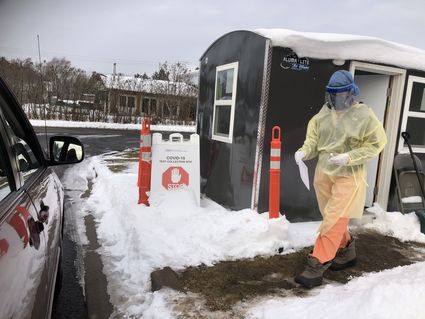 Covid-19 is here in greater numbers than ever before, Carlton County, and it's going to get worse before it gets better. How much worse depends on our residents, and how well we heed recommendations for masking, social distancing, hand washing and quarantining - that's the message local public officials sent during a press conference Tuesday.

"We have reached a critical time pretty quickly, and my fear is this is just the beginning," Community Memorial Hospital doctor and head of the CMH Covid-19 emergency response team Charles Kendall said. "I have been optimistic throughout this, especially in the spring, that we would not come to a point ... seen elsewhere with hospitals overwhelmed due to Covid-19. Just in the last week, I am much less optimistic."

The numbers tell the story.

A month ago, from Oct. 7-13, when numbers were beginning to rise, Carlton County was averaging about 4.7 new cases of Covid-19 per day. A month later, between Nov. 4 and 10, the average was 40 new cases per day. "That's eight times higher," Carlton County Public Health and Human Services director Dave Lee said.

Over that same time period - Oct. 7 to Nov. 10 - the cumulative number of Covid cases in the county jumped from 320 to 907, almost tripling. The county is setting records for new daily highs almost weekly now, with 49 new cases on more than one day over the past week.

Lee listed all the ways the spike in cases is affecting the rest of our lives, from schools going to distance learning, to hospitals filling up and public health workers being unable to complete contact tracing because there are too many cases. Police Chief Derek Randall said the Cloquet department has four officers off work and in quarantine.

The average number of positive cases per 10,000 people in the county jumped from 20.26 in early October to 38.55, Nov. 5. The school numbers are 10 days old by the time they're reported, Cloquet superintendent Michael Cary told school board members Monday, stating that he didn't foresee a return to in-person learning even by next month.

"Things are headed in the wrong direction," Cary said.

Deaths from Covid are up too. Carlton County went from one reported death for a period of months, up to two total deaths on Oct. 27. On Nov. 11, the state reported a cumulative total of seven deaths from Covid here.

The rise in case numbers has Kendall and other community leaders and medical professionals extremely worried.

"There are now more Covid patients hospitalized in Minnesota hospitals, in our hospital here in Cloquet and the others in Duluth than there has been at any other point during the pandemic," he said. "This has come at a time when hospitals - especially the two in Duluth - were already fairly full with other types of patients."

This month, intensive care units around the state are now at maximum capacity and seeing an increase in Covid-19 patients. They are also seeing an increase at CMH. Because of the increase statewide, it's become increasingly difficult for CMH to transfer some of its more serious cases to a larger hospital with more resources, Kendall said.

On the bright side, he said, hospitals and clinics across the region are working together, meeting and talking about capacities, ICU beds, staffing levels and details of providing care. They have enough PPE. They have well-made plans and partnerships in place.

Despite the arrangements, however, Kendall is concerned that CMH and other local hospitals may be overwhelmed at some point if the case numbers keep climbing exponentially.

Do whatever it takes, Kendall and the others said.

Wear a mask in any public space, and make sure it's clean, well-fitting, and placed over both nose and mouth. Stay 6 feet away from others. Wash your hands or use hand sanitizer frequently, but especially before eating or drinking or after being outside your home. Don't gather in large groups.

"A gathering of any size, especially one where you're taking off your mask to eat or drink, I'd have a hard time recommending that," Kendall said. "The same with sports at school. We have a big problem and anything we can do to limit that problem is imperative."

Dave Lee offered pointers for people to help slow down the spread.

He focused on symptoms first. "If you're feeling sick and develop symptoms of cough, sore throat or congestion, fever, loss of smell or taste, headache or body aches, please stay at home, contact your primary clinic or schedule an appointment at a community testing site for Covid-19," he said.

In Carlton County, test results are generally taking 2-5 days. While people are waiting for results, they should stay home and not assume they're negative. Better to assume you're positive. Start making a list of people you were in contact with for two days before symptoms started. Consider notifying those people that you got tested, the PHHS director said.

Getting a negative test result is not a "get out of jail free card" in many cases.

"If you were told that you were in close contact with someone with Covid-19 you have to stay at home 14 days from your last contact with that person, even if you get a negative test result," he said.

For those who are well and need to go out, he repeated the mantra: mask, stay 6 feet away, wash hands, sanitize and keep interactions to under 15 minutes.

"Because of the fast spread, any gathering outside of the household poses a risk of spreading and contracting Covid-19," Lee said. "You can potentially start spreading the virus 48 hours before you feel symptoms, and some people never feel symptoms," he said. "Silent spread is contributing significantly to our increase lately."

Although people need to take precautions, CMH CEO Rick Breuer said people should not delay needed health care. Winter is coming, and with it pneumonia and influenza. Other health care needs will go on and he wants people to take care of themselves and not be afraid. Waiting for needed care is part of the reason the hospitals are so full now, because people waited this spring and summer and ended up making the trip in an ambulance, he said. That's not the best way to take care of yourself, he said.

"If you're comfortable walking around at Walmart, then you should certainly be comfortable in a health care facility," Breuer said.

It's been eight months since the coronavirus officially arrived in Carlton County. Things have changed since then.

In the spring, when a jump of 14 cases per day was a big number, it was congregate care facilities like nursing homes and prisons that were hit the hardest. In Carlton County, it was the Moose Lake prison where the disease ran rampant for weeks, and ended either because of massive testing and other precautions or herd immunity, depending on whom you ask.

A statewide shutdown of all non-essential businesses (including bars, restaurants, gyms and hair and nail salons), helped bring the numbers under control but lasted nearly two months and hurt the economy and small businesses across the state.

Over the summer, the numbers subsided. People became less afraid, and began to enjoy going to restaurants and bars again, first sitting outdoors only, then moving inside. Communities still avoided large events like parades, powwows and other community gatherings, but people began having weddings and funerals again, traveling to other parts of the country, and gathering with friends and family.

School started again in September and most Carlton County schools began the year with roughly 75 percent of students attending school in person every day. And the temperature dropped, but people's tendency to gather did not.

Now, instead of congregate living, the majority of the spread of Covid-19 is happening within the community.

According to the Minnesota Department of Health cumulative figures on Nov. 10, the likely exposure point (where people were exposed to the disease) is most frequently "unknown" (56,112 cases), closely followed by "community-no known contact with a confirmed case" (42,016) and "community-known contact with a confirmed case" (36,984). Congregate care setting (staff, resident or visitor) is next at 17,840 cases, followed by travel (15,185), community outbreak (11,842), health care staff or patient (5,511), corrections staff, inmate or visitor (3,751) and homeless shelter staff or resident (440).

The age of those who are getting Covid-19 is also declining. Instead of being mostly elderly, it's now younger people getting sick and spreading the virus. (Older people are still affected the most severely, though.) Over the last two weeks in Carlton County, Lee said 14 percent of positive cases were seen in individuals up to 19 years old, 32 percent in ages 20-39, and 31 percent in ages 40-59. Just under 23 percent was seen in age 60 and older.

"We are seeing predominantly younger to middle-age range and it's in the community, so we're really requesting people take extra steps to take precautions."

Just as some medical advice has changed - masks provide protection to both the wearer and those around them, the CDC says now, but wiping down groceries or other random surfaces is not as urgent as it felt in the spring - ways of treating Covid have also adapted.

CMH CEO Rick Breuer said the hospital has established a home management program for patients with Covid-19 who tested positive but who do not require hospitalization. They are sent home with a small device that measures the level of oxygen in their blood and a nurse will check up on them.

"It's an early warning system if they go downhill, but also helps keep people out of the hospital," Breuer said. "To date, almost all of the Covid patients presented in Cloquet have been able to be successfully managed either at home by our primary care providers, or at CMH."

CMH has an agreement with St. Luke's to take more critical cases as needed.

Take care of each other

The people tell the story too.

"If we thought this would never reach us, that was our first mistake," Fond du Lac Chairman Kevin Dupuis Sr. said. A lot of people may not think it's important to slow the spread of the disease or even think that it's real, he added.

"But it is real," Dupuis said. "When it hits somebody near your family or in your family, then the realism sets in."

Most people now know at least one person afflicted with Covid. The longtime volunteer at a local veterans organization, the pastor at your local church, a neighbor, a family member, a Facebook friend, a soccer player, a parent, a kid, a health care worker.

Even more people know others who have missed school or work because they had to quarantine for 14 days after contact with someone who later tested positive for Covid-19.

Having teachers or coaches quarantine for 14 days is affecting our school districts and their ability to staff school buildings and classrooms. Having health care workers quarantine is having the same effect on local hospitals and clinics.

Dupuis compared the spread of Covid to an earthquake, with its epicenter in the more populated cities that were hit hardest first.

"The shockwave has reached us," he said.

Like the doctors and emergency workers before him, the tribal chairman stressed that it is simple measures that will help get us through these difficult times. Wash your hands for at least 20 seconds. Wear a mask. Stay 6 feet away from people in public spaces. Sanitize surfaces.

"Remember, when you wear a mask, it's not really about you. It's about protecting everyone around you. If everybody has that same concept, I think we go a long ways with this and try to minimize the problems." 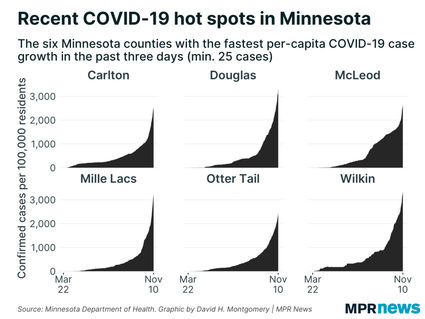 Another death was added Nov. 12, making a total of eight people who have died from Covid since the pandemic hit Carlton County in March, with seven of those coming in the past two weeks.