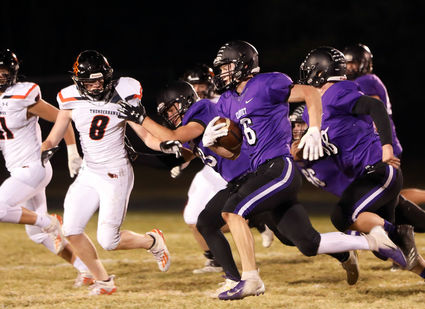 Friday night's Cloquet football game against the Grand Rapids Thunderhawks proved to be a nightmare. Prior to the game the Lumberjacks found out they had lost four coaches, including head coach Tom Lenarz, due to Covid-19 protocol and then the team proceeded to self-destruct with seven fumbles, four of which were lost as Grand Rapids throttled Cloquet 41-0.

"We had an assistant coach test positive, and after looking back on the few days before he got tested it was determined that I, and a couple of other assistants, could have potentially been within 6 feet for more than 15 minutes," said Cloquet head coach Tom Lenarz. "We decided that out of an abundance of caution we would quarantine ourselves to make sure the kids got to keep playing."

That meant the 'Jacks were without more than half their coaches, leaving just three coaches there Friday night. For Lenarz, it was the first time in his tenure as head coach that he'd missed being on the sidelines.

"It was incredibly tough," Lenarz said. "It was the first time I have not been at a Lumberjack football game in 18 years. Not being with the guys was hard emotionally. Luckily, my wife was there to help me through it. I watched the livestream with some of the other assistants who couldn't be there as we Zoomed with each other at the same time."

Cloquet gave up two first-quarter touchdowns and trailed 14-0 after the opening period of play, then gave up another touchdown in the second quarter to go down 21-0 at halftime.

Despite the loss, the Lumberjacks outgained the Thunderhawks 293 yards to 277 yards and they ran double the number of offensive plays. For the game, Cloquet ran 64 plays from scrimmage while the Thunderhawks ran only 32 plays.

Many of the problems for Cloquet centered around their ability to hang onto the football. In total, they put the ball on the field seven times.

"It is absolutely unacceptable and you can't beat anyone doing that," said Lenarz of the fumbles. "It has been an issue all year with us and is something we simply must keep working on. Guys have to realize how important it is to focus on hanging onto the ball. Until that happens, we will continue to struggle against good teams."

Things went from bad to worse in the third quarter when Grand Rapids scored twice more - building their lead to 34-0 after three quarters of play.

"Grand Rapids is big, fast and aggressive," Lenarz stated. "They have a senior-laden team that has played well this year. We knew that this was going to be our toughest game."

In an odd twist of fate, the Lumberjacks controlled the ball for nearly 36 minutes of the game while the Thunderhawks had the ball for less than 10 minutes. Despite the loss, Lenarz was able to find some consolation in the play of one of his junior athletes.

"Marshall Hayes has been a rock star for us this year," said Lenarz. "He is one of the few ball carriers that has not fumbled and is someone who does the dirty work between the tackles. He has played very well all year long and has really grown into the position. I am proud of his effort and the way he runs the ball. We will rely on him heavily in the playoffs and as the weather gets worse."

The Lumberjacks are now 3-2 on the season and were set to play at Duluth East Wednesday night.