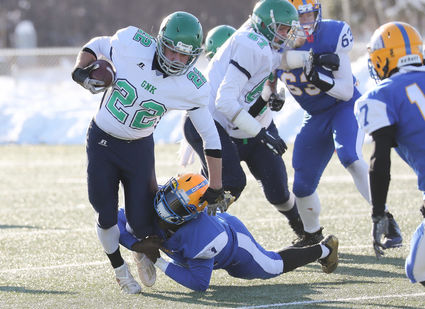 Usually when a high school football team heads into the playoffs there is renewed hope of the possibility of winning a section championship. Regardless of a team's record, there is always a chance to pull off an upset or two and perhaps make a magical run.

For Esko that chance was diminished greatly after they realized that much of their team would be quarantined by Covid-19 precautions as they entered the first round of the playoffs against Greenway/Nashwauk-Keewatin Tuesday afternoon.

"We found out Friday," said Esko coach Scott Arntson of the loss of players. "We were down about 45 players, mostly in grades 9-10."

The Titans came into the game with a 1-5 record and left with a 12-7 win and their second win of the season.

"It really affected our special teams," Arntson said. "We had to play 'iron man' football."

The Eskomos surprised the Titans on their first offensive play when Tyler Christensen hit Dylan Endland for a 32-yard touchdown pass, giving Esko a 7-0 lead just seconds into the game.

"We liked that matchup," Arntson said of the play.

Tyler Murray responded for the Titans before the first quarter ended with a 3-yard touchdown run following an Esko fumble, pulling Greenway/Nashwauk-Keewatin to within 7-6. 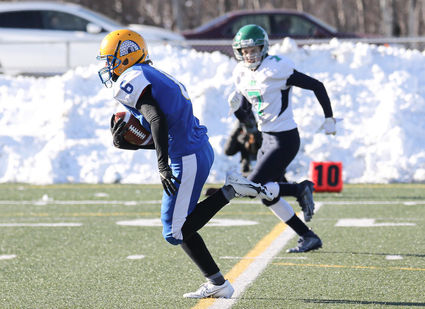 Esko's Dylan Edland gets behind the Greenway/Nashwauk-Keewatin defense for a first quarter touchdown catch during Tuesday afternoon's playoff game at Esko Schools Stadium.

The Titans got their final score in the third quarter after another Esko fumble. Murray again rammed into the end zone from the 3-yard line making it 12-7, and that would be all the scoring in the football game.

"Our defense did what it needed to do to keep us in the game," Arntson said. "Offensively, we did not execute very well."

It was a tough afternoon for the Eskomos, who lost three turnovers and also had two punts blocked. The Eskomos had only 23 players available to dress for the game.

"This season was a little bit of a grind, with Covid precautions and the number of injuries we sustained," said Arntson. "However, I enjoyed being with the coaches and the players."

Esko finishes the season with a 3-4 record.