Food train gets some statewide love 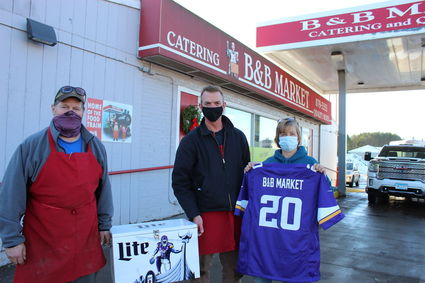 B&B Market's John Lind, Kurt Petersen and Kim Lind display the gift they recently received from the Minnesota Vikings recognizing the Cloquet store's efforts to provide food for those needing it during the Covid-19 pandemic, along with all the residents and businesses that have donated the past eight months. The food train is still going strong, the Linds said.

When the Covid-19 pandemic started, lots of people thought it might be over in a few months, but it's still going strong. So is the B&B Market's "food train."

Started in late March by a single donation from Cloquet's Lenny Conklin - who bought 100 pounds of ground beef to "pay it forward" - what grew into the food train is still chugging along, eight months later. During that time, individuals and businesses from all over Carlton County and even further away have donated money, products, anything to help out folks who are struggling during the pandemic.

If the donations are the fuel for the food train, B&B owners John and Kim Lind, along with all the staff at the small grocery store and meat market in Cloquet, are the train itself, the thing that carries the load.

Recently the Linds, the staff and the community of people who support the food train were recognized by the Minnesota Vikings as frontline workers during the pandemic.

Kurt Petersen, who's worked at the store for 17 years, sent in the nomination. He can't exactly remember how he heard about the Vikings/Miller Lite Frontline Features program, which recognizes "extraordinary Minnesotans who have overcome challenges to make a difference for others during the COVID-19 pandemic."

"I just remember reading about it, and I'm thinking to myself, 'I could tell the story of a whole town.' And that's basically what I said."

And then Petersen hit "send," walked away, and pretty much forgot about it, until about three weeks ago. That's when a Vikings representative reached out to him.

"I can't remember his name, but he introduced himself, said they got my nomination, and it took a minute to even remember what he was talking about. He told me, 'I really enjoyed your story. We'd like to recognize all of you.'"

Petersen had to keep it a secret for two weeks, then a large box containing an elaborately designed cooler arrived, bearing the image of a football player on a Viking ship and the Miller Lite logo. Inside was a customized Vikings jersey with "B&B Market" where a player's name would go, a stocking cap, mugs and tumblers, a banner, a certificate and more.

In a normal year, B&B Market and its supporters would have been recognized in a Vikings game program, but this isn't a normal year. With no fans, there are no programs. So the Vikings are planning to introduce their featured frontline workers on their website eventually.

Kim Lind said she was shocked when the cooler full of goodies arrived. "It's so nice they do things like that," Kim said. "And I felt kind of guilty. So many people have donated but I got the gift. It feels like it should be shared."

There has been a lot of sharing at the B&B Market on Big Lake Road. The food train has raised close to $116,000 since it started - fast and furious for months, and more slow and steady now.

Petersen talks about working alongside John Lind, and seeing how many times he'd be interrupted by people who wanted to donate, telling him, "here, take this."

"If you didn't see it, you wouldn't believe it," the Cloquet native said. "It's nice to see that the Vikings recognized all of us, not just John and Kim and Lenny, but everyone who donated. None of it would have been done if not for the community: Cloquet, Carlton, Cromwell, all those businesses that donated, people from all over."

The food train has morphed over time, adapting, with other community groups and charities getting on board. The B&B partnered with the United Way of Carlton County, and more recently the AEOA (Arrowhead Economic Opportunity Agency), which has been bringing truckloads of refrigerated food boxes to the store to give away each week.

Every Thursday afternoon, B&B staff unload the truck and help distribute the boxes - containing produce, dairy, meat and milk - and B&B contributes additional items. One week it might be a box of granola bars, another week something else. The food trucks come at 2:30 p.m. on Thursdays (except on holidays like Thanksgiving, when they came a day early with 490 boxes). Once the truck gets here, John Lind hops onto Facebook Live and does a video, letting people know what's available and how to get it.

Facebook has been the blaring horn of the food train, from the early days when John - who is definitely the face of the food train - would post photos of every single donor, to the Facebook Live videos he does on delivery day each week now.

The hometown market has also been delivering boxes of food to people who call them, ever since the food train started.

Petersen had gotten to do a lot of the deliveries.

"I told Kim, it's the most fun I've had in my 17 years. Just to walk up and give to somebody. Tell them to have a nice day and that's it. It's a nice feeling to be part of something like that."

Kim said there is definitely a need here.

"People must need it, because we get calls all the time for this," she said. "So there is a big need."

Petersen credits his bosses for their remarkable willingness. 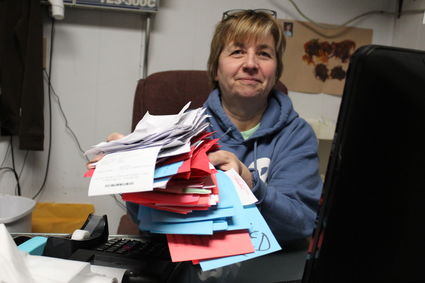 Kim Lind holds a stack of gift certificates used at B&B in the first months of the drive.

"They never questioned what they were doing, they just went for it," he said. "At first it was bags, then there were too many people in the store, so they went to weekly distributions, and deliveries to more targeted areas, like assisted living or low-income. They never said 'this is too much work,' they just said 'yes' to everything. It's amazing. But that's how they succeed, and that's how they work."

Community is important to the Linds and their business, he said, adding that he's heard John Lind answer someone's "thank you" with a "This is what we do" more than once.

"They both know the importance of community," Petersen said. "They know there's a give and take, and that we all need each other."

For her part, Kim Lind still marvels at how the food train took off.