Cloquet scraps to a bitter end 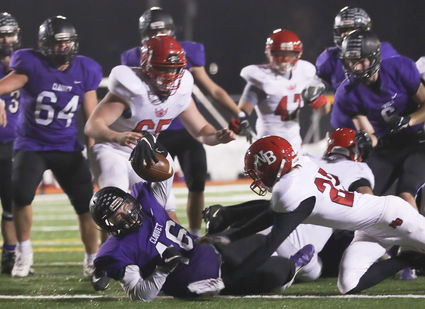 Cloquet's Jack Sorenson gets into the end zone past North Branch's Gabriel Huset for a two-point conversion during Thursday's playoff football game in Proctor.

The wild ride known as the 2020 high school football season came to an end for Cloquet on Thursday night in Proctor when Cloquet fell 40-36 to North Branch, a team the Lumberjacks defeated in the first game of the season.

One of the biggest issues Cloquet faced all night was slowing down the Vikings' running attack led by Ashton Labelle, who gained 178 yards.

"We just didn't tackle well, especially in the first half," Cloquet head coach Tom Lenarz said. "From a scheme perspective, we knew what they were going to do and we had guys in position to make plays. It just didn't happen for most of the night. I think they came out with more emotion than we did, and it took a while for our kids to respond. We also had several penalties that kept drives going for them. In the end they were just more physical than we were and it resulted in them continuing to move the ball."

After North Branch scored on its opening drive, Cloquet's Marshall Hayes and Labelle traded touchdowns less than two minutes apart to end the first quarter with the Vikings leading 16-8.

Second-quarter action saw Hayes score his second touchdown of the game on a 1-yard plunge, but the Viking also got a run of 4 yards from Coral Loghan as North Branch took a 24-16 halftime edge.

The Lumberjacks came out and had a big drive to start the second half, which was capped off when Reese Sheldon darted in from 14 yards out and Jack Sorenson rumbled into the end zone, tying the game at 24-24. However, on the very next possession Labelle slashed his way to a 41-yard touchdown run. After the two-point conversion, Cloquet trailed 32-24.

Before the third quarter ended, the Lumberjacks answered back when Alec Turnbull hit Sheldon for a 5-yard touchdown pass, but the two-point conversion pass fell incomplete, leaving North Branch up 32-30.

Less than three minutes into the final quarter, the Vikings piled up eight more points on an 18-yard touchdown scamper by Andrew Thauwald and a two-point conversion run by Labelle, giving them a 40-30 edge. Cloquet narrowed that gap to 40-36 on the third touchdown of the game for Hayes, which came on a 6-yard pass from Alec Turnbull, but again Cloquet failed on a two-point conversion, making the final score 40-36.

Cloquet started the season with three straight wins and appeared to be an odds-on favorite for the section, but an unexpected loss to Hermantown sent the team into a four-game tailspin.

"It's hard to identify one thing to put my finger on really," Lenarz said of the losing streak. "One thing we talked about was our inexperience this year and the fact that we played versus teams that were very senior-heavy at the end of the year."

Following the Hermantown loss, the Lumberjacks fell in succession to Grand Rapids, Duluth East and then finally North Branch.

"Grand Rapids, East, and North Branch were all senior-dominated groups," Lenarz said. "Our seniors worked hard this year, but they have been a small group all the way through. It is tough to ask juniors to go out and beat seniors week in and week out. Add in the fact that we didn't have any time to really teach the juniors anything this year, and it just magnifies the difference between older guys and younger guys.

"I don't question our effort or heart, but in the end these guys were put in situations at times this year that they had never been in before, and it showed. It should help us next year, but for this year there were some tough lessons learned."

The year proved to be an odd one with some coaches and players being out for Covid-related precautions as well as a season that started nearly a month-and-a-half later than normal, causing a wild scramble for coaches across the state. 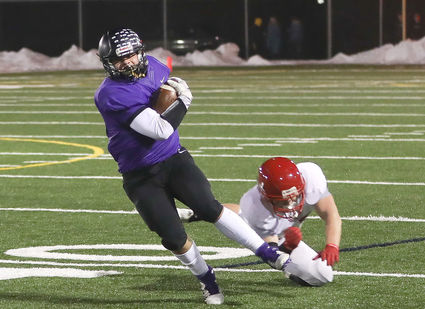 Cloquet's Marshall Hayes carries the ball after making a catch in Thursday's playoff football game with North Branch. He scored three touchdowns in the game.

"Despite everything, for me it was fun," Lenarz said. "I like that feeling of 'it's now or never.' For the kids, I think everyone reacts differently. Some kids feed off of that energy, and some get intimidated by it. It goes back to their previous experiences and whether they have been through it before or not. It would have been nice to win the game, obviously, but we played with intensity the entire game, and just came up short. I told the team they had nothing to hang their heads about afterwards. We definitely left it all on the field."

Lenarz saw his team drop to 3-4 on the season after the loss, but that didn't change how the group matured in the process.

"I can't say enough about how the kids and coaches have handled this whole season. Losing coaches and kids at various times throughout the season was difficult, but no one used that as an excuse," Lenarz said. "I will certainly remember this group of kids for the way they kept working, and played together when other kids might have quit. It was a tough season, but one that they can now be proud that they made it through."