'Jacks end it with exclamation point 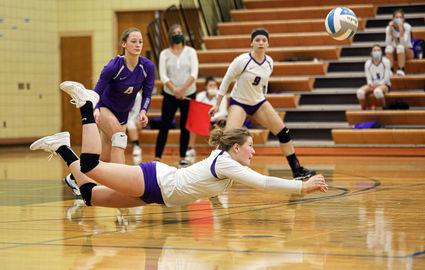 Cloquet's Morgan Van Reese makes a dig during Friday's match at Proctor High School. The Lumberjacks ended the season with a 3-1 win.

If there was a good way to end a season marked by the Covid-19 pandemic, the Cloquet volleyball team found it Friday night by downing the Proctor Rails in a total team effort. The Lumberjacks managed to wrap up their season just hours before the statewide shutdown took effect by dispatching Proctor 25-17, 25-19, 17-25 and 25-16.

"It was really fun. I knew we would really need to rely on our substitutes with this being our third away game of the week," said Cloquet coach Heidi Anderson. "We've also had the potential to have six players scoring, but it wasn't until the end of the season that we were really able to put it all together."

"It was nice to be able to play a few more games and play how we were capable," Anderson said. "This is a team that could have won 20 games with a typical season, but we really tried to focus our efforts on what we were able to do instead of all the things that were out of our control."

A big key in the Lumberjacks' surge this year has been the strong work of setters Emerson Rock and Morgan VanReese.

"Emerson and Morgan have been running a 6-2 offense most of the season," said Anderson. "We've been working on their set selection a lot in the latter part of the season and they both have really learned a lot about identifying where the other team's big blockers are and how their defense is set up and putting our hitters in a good position to score."

"We switched to a 5-1 against Proctor in the third and fourth set to allow Morgan to focus on her back row responsibilities, which allowed Emerson to attack a little more," said Anderson. "The decision making, set selection, and attacking was something we worked on a lot in that week stretch with no games and just practice. So it is really fun to see their work pay off."

Up front, the Lumberjacks made a massive group effort with Ava Carlson finishing with 11 kills, Brenna McClarey and Rock both adding eight kills, and Keelee Grashorn recording seven kills. 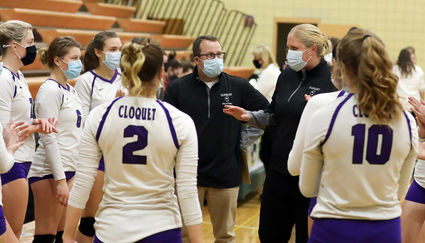 "Early on in the season we relied on just a couple hitters and then it is easier for the other team to key their blockers and defense on our hitters," Anderson said. "As we've been able to better control our first contact on blocking and defense, we've had more options of who to set. Our timing with our setters and hitters has improved and the team has also really gotten better at understanding how to get their teammates a one-on-one blocking situation."

Against Proctor, the Lumberjacks also got big efforts on defense in the back row. Joining VanReese with her 14 digs were Brea Rasmussen with 13 digs and three ace serves, Elli Willoughby with 12 digs and Trinity Semo with three ace serves.

"We've been playing our best volleyball at the end of the season and they were able to bring that to the final sets," Anderson said. "It was really fun to see the seniors come up with some big plays. I've been working with our senior class since they were 13 or 14 years old."

The Lumberjacks finished the season with a 9-4 record.