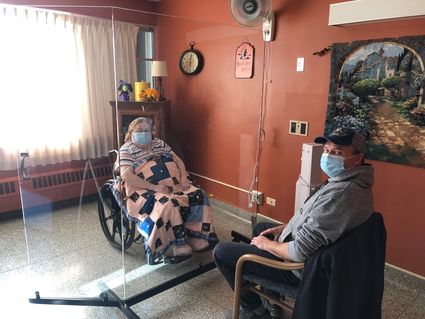 Sunnyside Health Care Center has this designated visitation area for indoor visits. Because of the high rate of community spread and current positive Covid cases, the long-term care facility is allowing only compassionate care visits for residents who are near the end of life or positive for Covid-19, because the virus can cause health conditions to change so rapidly, nursing director Jennifer Capra said. Visitors are provided with goggles and a surgical mask. If they're going on the unit, they also are provided with a gown.

The staff at Sunnyside Health Care Center don't know exactly how the coronavirus got into the long-term care facility: they just know that once it arrived, it spread quickly, sometimes with devastating effects.

Jennifer Capra, director of nursing at Sunnyside, said it started at the end of October, when community spread of Covid-19 was blowing up across the Northland.

"Once we got one case in here, it went like boom, boom, boom. You couldn't stop it," Capra said. "As soon as October 30th hit, we had positive cases every week. They designated one hall [to be quarantined], then they went to another hall."

And the problem with elderly populations getting Covid is that they are far more likely to get very sick or die from Covid. So while some people had few to no symptoms there, others didn't make it. Some residents showed gastrointestinal symptoms or low blood sugar, while others had respiratory distress. Many were just so very tired.

"Fatigue is huge," Capra said. "They just lose that ability to eat and drink because they're so tired, and then sometimes they just can't come back."

As of Monday, Dec. 7, there had been a total of 54 Covid cases at Sunnyside, with exactly half of those staff members and the other half residents. Six residents died from Covid.

Sunnyside isn't the only senior care facility in Carlton County to get hit hard by the virus this fall.

According to the most recent state report on long-term care facilities and Covid-19, as of Dec. 7, Carlton's Inter-Faith Care Center has had a cumulative total of 69 Covid cases, with 22 staff members and 47 residents testing positive. Three Inter-Faith residents died in the past two weeks from Covid.

Those are the two largest nursing homes in Carlton County.

Other Carlton County senior care facilities included in the Dec. 7 report include the following:

• Augustana's Kenwood and Oakview facilities, each reporting one staff member and zero residents positive, no deaths;*

• New Perspective in Cloquet, nine cases, with two staff members and seven residents testing positive and one death so far;

The vaccines are a distant light at the end of the tunnel, Sunnyside medical director Ken Ripp said. Right now, Carlton County and the rest of the Northland need to get the current surge of Covid that's spreading - in many cases - through unknown community contact under control.

"Covid is not a battle, it's a war," Ripp said. "We need everyone in the community to do the right thing as far as wearing masks, washing hands, avoiding crowds, and not gathering outside of your household for now."

The problems here extend statewide and across the country, as cases surge due to colder weather and people moving indoors, exacerbated by those who refuse to wear masks, or wear them incorrectly, sometimes spreading the disease without even knowing they're sick.

Minnesota Department of Health commissioner Jan Malcolm and Gov. Tim Walz held a press conference Friday to address the effect of the Covid-19 surge on all congregate care facilities, which include nursing and assisted living homes, group homes, mental health and substance abuse facilities and more.

Malcomb referred to the state's five-point plan - which includes expanded testing and support, adequate personal protective equipment supplies, adequate staffing and public/private partnerships - as a "floodwall" built to keep the disease at bay.

It worked pretty well over the summer and early fall, she said, and even after the state started seeing a rapid acceleration of cases.

"Unfortunately, even the strongest floodwalls aren't sufficient if the waters are high enough," Malcomb said. "We knew all the efforts to ensure safe visits and keep long-term care facilities safe could all be undermined by continued out-of-control community transmission."

The statistics have proved her right. In the two-month period from September to the end of October, new cases in the overall population of Minnesota increased 73 percent while cases in long-term care facilities increased only 15 percent. As the surge continued from the beginning of October through November, cases in the general population and long-term care facilities both grew by more than 400 percent, she said.

The floodwall has been breached, Malcomb said.

At Sunnyside, for now at least, things are getting better, said Capras. Although residents and staff are still being tested twice a week, cases are down. They're trying to figure out what they can do differently, and looking forward to the vaccines being available to residents and health care workers.

She worries that other facilities in Carlton County are now reaching the point where they were three weeks ago.

"They're in the starting phase and we're kind of hitting the end peak here, but again, it goes in waves," she said. "We're seeing people recover, staff coming back and we're in a good spot. But that could change at any minute."

It's not just the residents who are affected by the virus. Staff members get Covid too, often while they're out in the community. They see residents they know and love, people they've cared for over years get sick, and even die.

Capras said they are trying to stay on top of staff physical and mental health. They offer an employee assistance program that provides therapy when needed. And constant communication helps, she said.

"A lot of them had Covid themselves and they're dealing with the repercussions of that. Many have anxiety after Covid. Plus there's just the unknown - you don't know what you don't know. We are just trying to be available for them, and give them the resources they need."

At the same time, Capra said the pandemic also showed how phenomenal the staff is at Sunnyside.

"They treat these people like they are their own family members: they're dedicated, they're loyal," she said. "The one positive I can take out of this whole [ordeal] is that it has brought my team closer together."

Cloquet's Jody Acers, whose mother got a mild case of Covid but recovered, had high praise for the staff at Sunnyside.

"They really do care, and they are doing everything they can to keep it out but it's blowing up everywhere," she said. "The whole staff have been working so hard, and they've been nothing but transparent and supportive with families. I can't say enough about the place."

During Friday's press conference, Gov. Walz said community members can and should do their part to protect those staff members, pointing out that some people suggest the answer is putting up a barricade around residents and staff of long-term care facilities so the rest of the population can get on with life as usual.

"Folks have to care for [our elders] ... whether it's preparing food, changing linens, or being there to help with programming, all of those things," Walz said. "Those people don't live there, they live in your communities. They stop on their way home to pick up their children from daycare. It's those places, if you're not wearing a mask or your child gets it and passes it on and it goes to that person and they take it into a care facility. The crisis starts to become what if everyone who works at a care facility isn't there to work?"

The state is also trying to help with facilities that run low on staff. Some 270 Minnesota National Guard members have been trained as temporary nursing staff and assigned to 11 different teams that are rolling out to facilities across the state when they're needed. Another 100 trainees are coming up the pipeline, Maj. Gen. Shawn Manke said. So far they've supported 17 different long-term care facilities across the state.

"I know I'm safe to say no one imagined performing care in long-term care facilities when they volunteered for the National Guard," Manke said during Friday's press conference.

While they might not have imagined it, they tackle it with the same commitment they show to other missions, he said, sharing a quote from a soldier who told him: "Training for my wartime missions was one thing, but helping people in our communities is why I serve in the National Guard."

Manke made a plea directly to the public Friday. 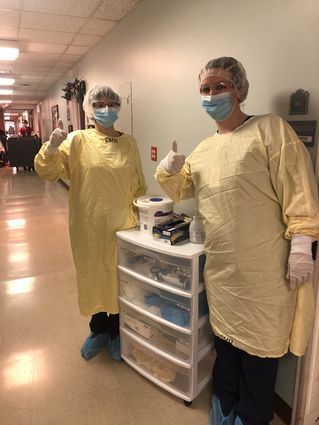 Sunnyside staff members dress from head to toe in personal protective equipment so they can enter rooms of residents who are sick with Covid-19.

“Our soldiers left families, jobs and schools because they were ordered to fulfill critical roles in the front line against Covid-19, but they can use your help,” he said. “Contact tracing confirms these long-term care facilities are being put at risk. Not from inside their walls, from outside. They need your help to lessen the community spread. I’m begging you on behalf of the 13,000 Minnesota National Guard members to follow these simple rules: wear a mask in public, limit your potential exposures when you can, follow CDC and MDH recommendations and temporarily adjust your lifestyle to limit the spread of disease. Doing this will help health care workers, first responders, and other frontline workers stay healthy and stay on the job.”

* The resident numbers were corrected to zero on Dec. 13. In the original story, we wrongly stated that one resident had also tested positive at these facilities. We apologize for the error.