Finally, pucks are being dropped 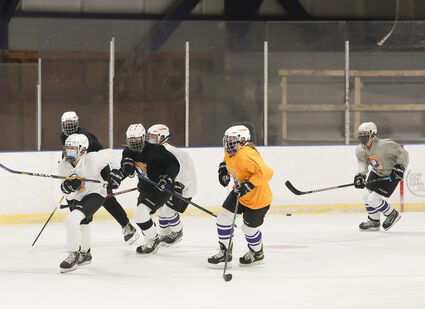 The Cloquet-Esko-Carlton girls' hockey team took to the Pine Valley Ice Arena ice for the first practices of the season on Monday. The girls' first game is scheduled for Jan. 15, against the Duluth Northern Stars at Heritage Sports Center in Duluth.

A year ago, the Cloquet-Esko-Carlton girls hockey team completed a season for the ages by going 27-4 and finishing as runner-up at the Minnesota High School Class A Girls Hockey Tournament. The 'Jacks graduated seven seniors off a team that set a school record for most wins in a season.

Gone from this year's team is last year's powerhouse line of Taylor Nelson, Kiana Bender and Dea DeLeon. Nelson is playing hockey at Division 1 Bemidji State and Bender and DeLeon are teammates on the University of Minnesota-Duluth softball team.

"We lost a significant amount of seniors so we are excited to...