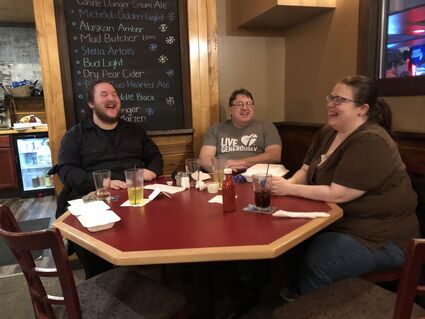 Cisco Garcia, Jeremy and Jennifer Graham enjoy a second meal at Carmen's Tuesday evening after having lunch there earlier in the day. "We've been coming here at least once a week since 2012," Jennifer said, enjoying the chance to have a meal inside the restaurant now that the state mandate was lifted. "We appreciate small local businesses, so we try to support where we can. But this is really our place," she said.

Loyalty means a lot in the hospitality industry, especially during a pandemic.

So does the ability to adapt.

At area restaurants that has meant surviving without indoor dining for months at a time, in part by creating other ways to serve customers. Magnolia Café built a new walk-up window in the front. Pedro's invested in a new online ordering system, after using Facebook messenger to take online orders in the early days. And Ryan Lindstrom and Zach Zezulka of Carmen's Bar and Restaurant bought a large tent, which now sits over the back deck, warmed by two portable fireplaces and three big tower heaters in the midst of the Minnesota winter.

"We have very loyal customers, great support, and our regulars are awesome," said Lindstrom. "There's even some that have battled through a couple beers on the deck, just so they could hang out for a while."

But even with all the work-arounds, indoor dining reigns supreme. So restaurant owners breathed a sigh of relief Monday, when they were allowed to reopen to indoor dining for the first time since Nov. 20.

The reopening comes with limits. Indoor dining is allowed at 50- percent capacity. Parties at tables are restricted to six individuals, with 6 feet between parties. Bar seating is limited to parties of two, with 6 feet between. All venues must be closed for on-site food and beverage service by 10 p.m. Customers must wear masks, at least until they reach their table.

"I'm really happy to be open," said Leslie Guthrie, bar manager at Bricks Pub and Grub in Wrenshall. "People were pretty supportive during the shutdown, but it's good to be open again." A handful of customers and staff members sat in small clumps at well-spaced tables in the bar/restaurant, while others - like high school senior AJ Maijala - picked up food to go.

Pam and Jeff Duncan were certainly happy to find Carmen's open in Cloquet on Monday. The Twin Cities residents were on their way home from a cabin on Lake Vermillion, and met up with Cloquet buddies Carolyn and Frank Kedrowski at the restaurant on Big Lake Road. The two couples had the bar to themselves shortly after 11 a.m.

"It's nice to be able to meet somewhere warmer," Frank said. "But I'm glad they could come up with some workable solutions when they didn't have anyone [inside], like the heated deck."

Pam said Covid hasn't affected them too much, since they're both retired and they have a cabin to retreat to.

"But we feel really bad for the restaurants," she said, adding that they tried to support them, wherever they went. When indoor dining was banned, they ordered carryout, or they'd sit outside on a deck when they could. The Kedrowskis did the same, and they bought gift cards to give for Christmas gifts in some cases.

Even with people finding different ways of supporting restaurants than simply going out for a meal, Covid-19 has had very real and sometimes dire consequences for restaurants, bars and the entire hospitality and tourism industry, said Liz Rammer, president and CEO of Hospitality Minnesota in a radio interview Monday.

The hospitality industry pays 20 percent of the state's sales tax. It creates one in 10 jobs in Minnesota, a total of approximately 300,000, Rammer said.

Many in the industry have been laid off from jobs.

Carmen's went from 32 employees to a six- or seven-person crew during the most recent shutdown, as they no longer needed waitstaff or dishwashers, with all meals being takeout or curbside pickup.

"And that was right before the holidays," Lindstrom said. "A fair number of those were high school students, but it's still not fun. But at least they don't have big boy bills - you worry most about your full-time staff at times like that."

"It's the worst year I've ever had in my whole life," Johnson said. "I've never been closed for five months before."

Business was even down when the doors were open, he said, because a lot of older customers don't want to eat inside and the large groups that often came to the Brickyard are not allowed under pandemic guidelines.

"But just being open helps," Johnson said Tuesday, his first day back. "Hopefully things will pick up."

The pandemic has brought bigger challenges to smaller restaurants, because of social distancing guidelines and staffing numbers.

At Culbert's Cafe in Cloquet, it has meant closing the restaurant and selling baked goods to make the rent until the diner's owners can seat customers at 100 percent capacity again.

At the Magnolia in Carlton, they added the previously mentioned window, and plan for limited, socially distanced seating indoors when they reopen Monday, Jan. 18. Owner Yvette Maijala said they planned to reopen on Jan. 11, but two staff members got Covid so they bumped it back a week. "We don't have a B-team that can come if we get sick,"

Bearaboo Coffee Escape reopened to indoor dining on Monday too, after closing to indoor dining prior to the governor's executive order in November, to protect staff and customers when Covid cases were rising rapidly in Carlton County.

Owner Natalie Swanson said the customers weren't exactly beating down the door to get inside on Monday. The drive-thru was busy - as it often is these days - but only a couple tables were taken indoors. Swanson had high praise for the community support they've seen during the pandemic, and she's excited about the future of the combination cafe and carwash.

Reopening won't solve all the issues for the hospitality industry, but it's a step.

The aid for businesses - like restaurants, bars, movie theaters and gyms - passed by the state legislature and Gov. Walz last month is another piece of the puzzle.

Although he is grateful for the state aid, Lindstrom said they're still waiting for more details.

In the meantime, they are counting on their regulars and other community members to keep showing up, whether it's for a drink on the deck, takeout or a sit-down meal inside.

"I can't say enough about our community, all the local support," Ryan said. "They're the reason we're still here."

• Pools, including water parks, may open to 25-percent capacity.

• Fitness centers and gyms may open to 25-percent capacity using social distancing of 9 feet, with a maximum of 150 people and 25 people per class.

• Indoor events and entertainment are permitted at 25-capacity with a maximum of 150 people.

• Large venues can open to 25 percent with social distancing and an overall maximum of 750 people. • Outdoor events and entertainment permitted at 25-percent capacity with a maximum of 250. 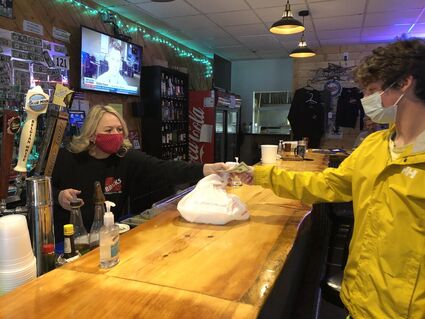 AJ Maijala picks up an order of chicken wings from Leslie Gutherie at Bricks Pub and Grub in Wrenshall on Tuesday.

• Small weddings receptions and other private parties may resume, with limits.

• Churches remain at 50-percent capacity, but the new order no longer limits the overall number of worshippers.

The mask mandate is still in effect statewide.