It's tough sledding early on for 'Jacks 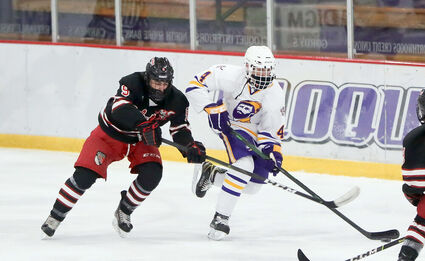 The new high school boys hockey schedule could not have been much tougher for the opening two games of the season for the Cloquet-Esko-Carlton boys hockey team. On Thursday the Lumberjacks opened with a 6-1 loss to Grand Rapids and on Friday they fell 2-1 to Duluth East Greyhounds - two of the state's top-ranked teams.

"Grand Rapids was a great puck-moving team with a solid group of defensemen that can move and possess the puck," said CEC coach Shea Walters. "They were fast and capitalized on their opportunities."

The Thunderhawks wasted little time gaining momentum as they outshot the 'Jacks 13-2 in the first period. CEC kept Grand Rapids off the board until the 13:46 mark of the period, but the Thunderhawks scored a second goal less than three minutes later to take a 2-0 edge into the second period.

"We were still not at full strength because we have two seniors out," said Walters. "It was good to see where we are against a top-five team in the state, but we lacked getting pucks to the net."

Logan Dushkin gave the Lumberjacks a small ray of hope when he lit the lamp on the power play at 5:47 of the third period on assists from Brayden Tyman and Cade Anderson, cutting the Thunderhawks lead to 4-1. Unfortunately for CEC, Grand Rapids bounced back with two more goals before the end of the third period, making the final score of 6-1.

Jacob Walsh got the nod in the nets for CEC and was called on to face 46 shots, including 22 in the second period alone. Walsh finished with a total of 40 saves.

On Saturday, the Lumberjacks hosted the Greyhounds - another Top 10 team in the state rankings - and dropped a 2-1 decision. CEC scored first on a goal by Brayden Tyman with Dushkin assisting. The goal came at the 1:35 mark of the second period.

"We had the momentum after scoring first, but unfortunately we gave back the momentum quickly by giving up a goal," said Walters.

The East tying goal came less than two minutes after Tyman's goal. Three minutes after that, the Greyhounds jumped on a power play chance to make it 2-1, and that's how things ended.

Zach Tyman played goalie for CEC and had a good game by making 44 saves on 46 shots against East.

Despite opening the season with a pair of losses, the Lumberjacks can take note that they played two of the best teams in the state, and the learning curve will be steep. 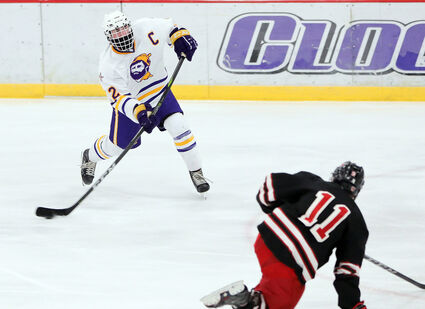 On Tuesday, the CEC boys team picked up its first win of the season by defeating Virginia 3-0.

The Lumberjacks will play next at Hibbing at 7 p.m. Friday night and against Hermantown at home starting at 7:30 p.m. Thursday, Jan. 28. There is no general admission. Anyone not on the player list for games is encouraged to livestream the game online at mnsports.tv/cloquet-hs-sports, for a fee. There are daily passes as well as season passes for home basketball games and home hockey games, and a combination pass for both.