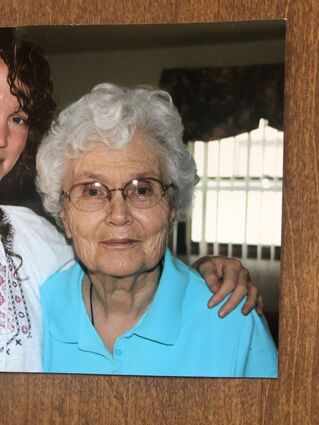 Joyce Mathiason Iverson, 97, of Cloquet, passed away Jan. 23, 2021, at Evergreen Knoll in Cloquet with family by her side after enduring a battle with bullous pemphigoid.

She was born Sept. 9, 1923, in Highwater Township in southwest Minnesota to Alfred and Elfie Mathiason. Joyce was baptized Oct. 7, 1923, at Old Westbrook Lutheran Church, where she still maintained membership.

She attended rural school for eight years and graduated from Storden High School in 1941. Joyce went on to graduate from teacher training in Lamberton and taught eight grades at the Rose Hill rural school, south of Westbrook, in 1943 and 1944.

She was married to Herbert Iverson June 24, 1944, at Old Westbrook Lutheran Church. They farmed in Highwater Township, where they raised their four children. In their later years they enjoyed traveling in the U.S. and overseas. They enjoyed many winters in Apache Junction, Arizona, where Joyce developed a love for desert hikes in the mountains.

Following Herbert's death in 1992, Joyce moved to Lamberton and continued to enjoy wintering in Arizona. In 2010, with her health declining, she moved to Evergreen Knoll. There she felt a sense of community and it became her home. Joyce adjusted to living in northern Minnesota while continuing to love seeing open spaces and cornfields.

Joyce had an endless sense of curiosity and desire to learn. She read widely and always had a list of books she wanted to read. She had a lifelong love of gardening, was an accomplished seamstress, made delicious baked goods, and enjoyed working crosswords and Cryptoquips. Joyce enjoyed volunteering at area nursing homes, quilting for Lutheran World Relief, and being a volunteer driver.

Her children, grandchildren, and great-grandchildren were her greatest joy. Joyce was a gracious and warm person who was nonjudgmental and generous. She blessed others with her quick wit and sense of humor.

Joyce was preceded in death by her parents, Alfred and Effie Mathiason; sister, Doris Nelson Triplett; son- in-law, Terry Bergerson; grandson Keith Bergerson; and great-grandson Jack Iverson. Joyce is at peace because of her trust in her Savior.

The family requests memorials to goodgifts.elca.org or a charity of your choice.

Due to Covid-19 restrictions, a private burial will be held at Old Westbrook Lutheran Cemetery with a service planned for this summer.