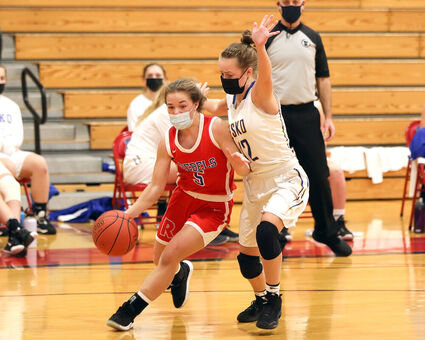 A quick start which led to an 18-point halftime lead propelled the Esko girls basketball team to an impressive 63-42 road win over a fiesty Moose Lake/Willow River squad Thursday, Jan. 21.

"They are a skilled athletic team and we anticipated they would shoot a lot of 3s," said Esko coach Scott Antonutti. "Because of that, we wanted to stay close enough on the perimeter to challenge 3-point shots, but also be able to play in a way that we wouldn't need a lot of help by stopping them when they put the ball on the floor to get to the basket."

Rebels coach Zac Mathson said 15 was a season high for his team. "We need that number to be below 10 against good teams to win," he said. "The game speed was quick for our girls and it was something that they needed to do a little adjusting during the game to match that effort."

Sarah Wagemaker had 21 points on 10-of-14 shooting as well as going 9 for11 inside the arc and 1 for 3 on 3-point shots to lead the Eskomos in scoring. Brenna Stark also was in double-digit scoring for Esko with 11 points. Esko finished with 10 different players scoring in the game, including Aila Gabel, who was 3 for 4 from beyond the 3-point line with nine points.

Leading the Rebels in scoring were Natalie Mikrot and Monica Mikrot with 19 and nine points respectively.

"I think Mallory Sunnarborg always plays well on the defensive end of the court for us and Sarah Wagemaker contributed on both ends of the court by also picking up seven rebounds," Antonutti said. "I also thought Jayden Karppinen had a great game at both ends of the court. She didn't score a lot, but she filled up the stat line with six rebounds, six assists, two steals and three blocked shots. She plays a lot of minutes for us and plays with a lot of energy."

On the other side of the court the Rebels also had some solid performances.

"Defensively, I like how Sarah Christy played. She was moving her feet, contesting shots, and wanted to guard their player that other players struggled with," Mathson said. "I also thought Ella Rhoades did a decent job rebounding. Esko made a lot of their shots so rebound numbers were not that big."

Mathson said he thought there were times the Rebels played pretty solid defense. "Overall, I know we can do better; Esko is a very good, patient team that makes teams play defense." 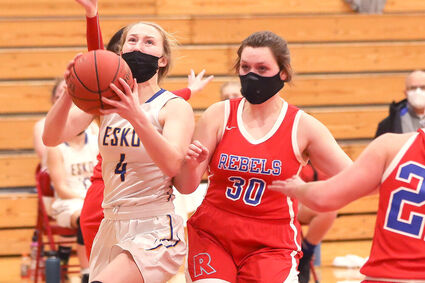 Also scoring for Esko were Kaitlyn Adkins with five points and Jayden Karppinen with four. Avery Kulkinski, Mallory Sunnarborg and Rachel Antonutti each had three points while Ava Korby and Kyra Johnson each finished with two points in the game.

"I feel like we still have a lot of rust to knock off. With Covid going on, I know most of the girls did not have access to gyms and maybe not picked up a basketball since last year," Mathson said.

The loss drops the Rebels record to 2-1 on the season while the Eskomos improved to 2-0.