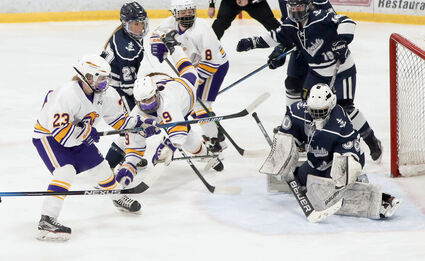 Cloquet-Esko-Carlton's Eve Eugenis gets a shot on goal stopped by Hibbing's Addison Hess during Tuesday's game at Northwoods Credit Union Arena. The 'Jacks were blanked 2-0 after an impressive season opener win Saturday against Pine City.

The Cloquet-Esko-Carlton girls hockey team got a chance to shake off the rust on Saturday as they opened the season with a 4-1 home win over Pine City. The Lumberjacks were the last team in the area to open their season after coming off a state Class A runner-up finish last season.

It didn't take long for CEC to get back into a rhythm. Lauren Sertich scored just 1:11 into the game on the very first shift of the season for the Lumberjacks, assisted by Emily Litchke and Frankie Halvorson.

The senior said the first goal felt great. "Truly an amazing feeling to start off your senior year, first shift of the game and have the puck end up in the back of the net. Everyone on the ice touched the puck, it was a good team goal," Sertich said.

"We were very excited to start the season and get on the ice after our long-awaited delay," Olin said. "Our first shift certainly started the season on a great note. We had all five players consecutively touch the puck prior to Lauren scoring, so it truly was a team goal to start the season."

The game was a fast-moving and clean affair, with neither team taking a penalty in the game. Still, as fast as they had started, the cooldown followed. After a scoreless second period, the Lumberjacks turned up the heat when Dana Jones connected on a goal 4:10 into the third period with assists going to Sertich and Lilly Hanson, pushing the CEC lead to 2-0. It would be the first of three straight goals for the quick forward.

"Dana (Jones) is an extremely hard worker and has a great shot," Olin said. "We have been encouraging her to shoot the puck as much as possible, and I think the third period is a great example of her ability."

Jones quickly found the back of the net again at the 6:30 mark of the third when she converted on a nice passing play from linemates Sertich and Hanson, giving CEC a 3-0 lead.

The Dragons finally got on the board with a goal by Ava Rydberg at 9:47 of the third period, but Jones capped off her hat trick with just 50 seconds remaining in the game for the final of 4-1. Jones' third goal was assisted by Bella Harriman and Hanson.

"We were happy with the game," said coach Olin. "A big positive was the amount of shots we put on net. Our goal is going to be continuing to work on capitalizing on some of those scoring opportunities."

On Tuesday night the Lumberjacks hosted Hibbing/Chisholm and the game turned into a battle of the goalies. CEC's Araya Kiminski and Addison Hess of Hibbing/Chisholm hooked up in a duel that was scoreless through two periods. At that point Kiminski had made 21 saves on 21 shots and Hess made 14 saves on 14 shots - meaning it was scoreless after two periods. Things changed, and quickly, for the Bluejackets who scored back-to-back goals at the 12:53 mark and at 13:47 of the third period to give them a 2-0 lead. Eventually that is how things ended, with the 'Jacks taking their first loss of the season. 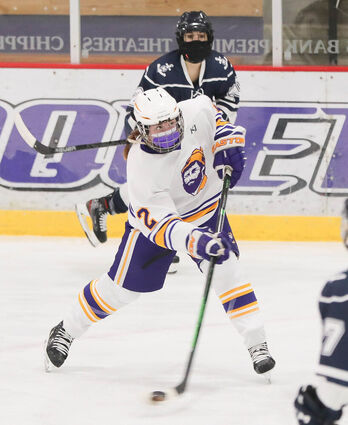 Playing in a pandemic comes with challenges - like the one that delayed the start of their season an additional two weeks - but Sertich said the team is making the most of the time they're given.

"We've all learned not to take anything for granted and leave it all out on the ice," Sertich said.

CEC put up 15 shots on Hess in the third period, but the Bluejackets goalie stood tall and held CEC off the board, giving her team the road win.

The girls team was scheduled to play Duluth Thursday in Cloquet and face Superior Monday. Both games are in Cloquet.