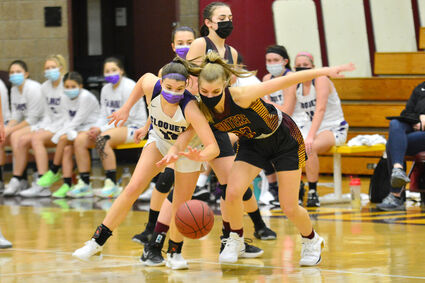 Cloquet's Alexa Snesrud and Denfeld's Selah Reinertsen battle for a loose ball Tuesday as the Lumberjacks crushed the Hunters in Duluth.

It was a big week for the Cloquet girls basketball team. Last Thursday the Lumberjacks dispatched Duluth East and on Tuesday they downed Denfeld, completing a sweep of the Duluth schools.

"The girls played really hard," said Cloquet head coach Heather Young of the East game, adding that they focused on defense, playing full court defense and doubling on the inbounds against the Greyhounds, whom they beat 75-62.

"We have been working a ton on our help defense in practice and it is beginning to show. With the girls playing so hard on defense, it created a lot on our offense because we were able to get some deflections, steals, etc. and head in for layups, or an offensive setup."

Alexa Snesrud, Katie Turner and Maddie Young were red-hot on the offensive end for Cloquet, with Snesrud popping in 22 points, while Turner and Young each had 17 points. Justice Paro was also in double-digit scoring with 10 points for the 'Jacks.

The Lumberjacks were able to get to the free throw line 18 times, converting on 12 of those charity shots. For the game, the Lumberjacks shot 48 percent from the field, hitting on 30 of 63 shots, while East was at 45 percent with 24 of 53 shooting. The difference was Cloquet was able to get turnovers and convert them into points on the scoreboard.

"I am just so proud of where these ladies are headed," said coach Young. "It was a group effort - from our starting five to spark us, to any player who came off the bench or supported on the bench. It is a neat feeling to see things coming together."

Also scoring was Kiley Issendorf with four points for Cloquet, while both Gracie Meagher and Caley Kruse added two points. Ava Carlson had a point.

"We plan to keep getting stronger and faster as the season goes on," Young said. "We will see East again soon, and we know they will come with a game plan. We just need to be ready on our end to possibly have some different looks that we can throw at them."

On Tuesday night the 'Jacks got off to a 10-0 lead and never looked back on their way to an 83-41 victory over Denfeld.

The Lumberjacks pushed that 10-point early lead up to a 49-25 advantage by the halftime break as Maddie Young scored 14 of her game-high 21 points in the first stanza.

Much like the game against the Greyhounds, the Lumberjacks wreaked havoc on defense by creating numerous turnovers and deflections which resulted in solid offensive sets and easy points off transition. 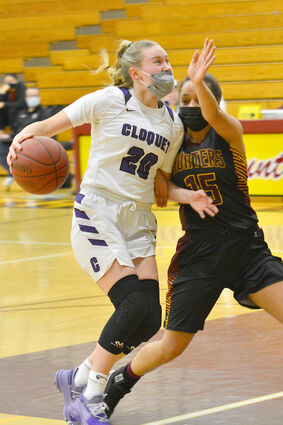 Cloquet's Maddie Young works past Denfeld's Jordin Kovach as she makes her way to the hoop. Young led the 'Jacks with 21 points.

"We are happy to get the win tonight," said coach Young following the game. "We are just taking things one game at a time and not looking past anyone. We are always looking for improvement on both ends of the court."

With the wins, the girls' record sits at 3-4. They play at Grand Rapids on Saturday, and home against East Tuesday.

Fans not on the player guest list for admission can livestream Cloquet games online at mnsports.tv/cloquet-hs-sports for a fee. There are daily passes as well as season passes for home games.