'Jacks are back on a winning track 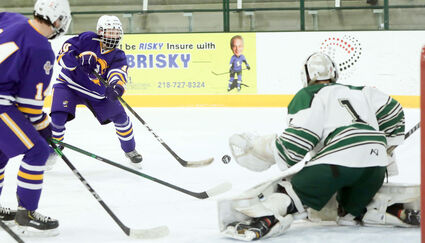 Cloquet-Esko-Carlton's Patrick Dunaiski gets the puck to the net Tuesday at Proctor.

After losing three of their last four games, the Cloquet-Esko-Carlton boys hockey team needed something good to happen Saturday night in Eveleth. Their answer was a pair of goals early in their game against Eveleth-Gilbert and a solid 4-2 road win over the Golden Bears. That was followed up by an impressive 8-1 road win over the Proctor Rails Tuesday night.

Against Eveleth-Gilbert, the Lumberjacks scored just 3:24 into the first period when Brayden Tyman took a feed from Brock House, put his head down and went to the net to ram home the first goal of the game. That was followed just a minute-and-a-half later on a Jaxson Ochis slap shot from the point to quickly make it 2-0 for CEC in the first period.

"Tyman's goal was a good hard goal with him going to the net hard," said CEC head coach Shea Walter. "We had several opportunities right away and he was able to convert. Ochis had a nice shot through traffic and got it off quickly. We have been working with our defenseman to get the puck through traffic. It was good to get out to a quick start, something we have been struggling with lately."

The Lumberjacks added to the total just 23 seconds into the second period when Travis Berg scored on a power play with assists to Carter Salo and Logan Dushkin, making it 3-0.

"Our power play has been pretty good lately. We are finally getting into the rhythm of getting pucks to the net. Berg's goal was perfect where it was good puck movement that got the killers moving side to side and up and down," Walter said. "We were able to hit a cross seam that opened Berg up, and he put it in the net."

Unfortunately, the power play appeared to wake up the Golden Bears, who unloaded 18 shots on the CEC net in the second period, eventually resulting in a goal by Brett Okland that cut the lead to 3-1 as the second period ended.

"In that second period we gave up several shots on the penalty kill," Walter said. "Eveleth plays to their strengths in that rink. It is small and no shot is a bad shot in that rink. We were able to keep them to the outside and on the perimeter, and got out of the period with the lead."

Tyman notched his second goal of the game 1:10 into the third period with the assist going to Kyle Siitar, making it 4-1. Eventually the Golden Bears added a late goal, but it was not enough to overcome the 'Jacks despite CEC taking three third-period penalties, including a major for kneeing.

"Staying out the box is obviously something we strive for. We have a hardworking, disciplined team but we were caught up in some ticky tacky plays that resulted with us in the box," said Walters. "The good news is our penalty kill is probably our most successful part of our game. We are at a 95-percent kill rate, which is outstanding. We are taking away shot lanes and blocking pucks. We have good personnel, with good feet and sacrificing their bodies."

CEC goalie Zach Tyman had a solid game in the nets, making 37 saves on 39 shots by the Golden Bears.

"He has bailed us out a couple times, and the more time he gets, the more he is settling in and giving us a chance to win," Walter said. 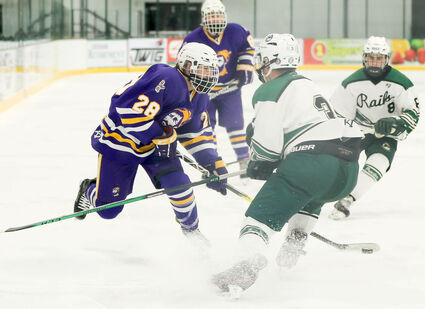 Tuesday night the Lumberjacks followed up with a nifty 8-1 victory on the road over the Proctor Rails. It didn't take long for CEC to garner a lead as Kyle Siitar scored the first of his two goals just 1:54 into the game with a wrist shot from the right circle.

Before the first period ended, the Lumberjacks tacked on four more goals to go ahead 5-0. Scoring goals were Dane Painovich, Travis Berg, Cade Anderson and Logan Dushkin in a period that saw CEC put 23 shots on the Proctor net.

CEC added three more goals in the second period from Siitar, Painovich and Brock House as they built an 8-0 lead after two periods.

The game went into running time in the third period with the only goal of the period being scored late in the game by the Rails.

The Lumberjacks outshot the Rails 44-14 for the game as Jacob Walsh picked up the win in goal for CEC. The win evened the 'Jacks record at 5-5 on the season.