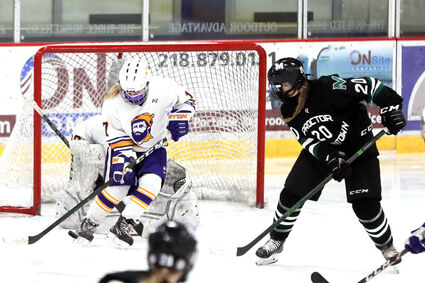 Cloquet-Esko-Carlton's Emily Litchke blocks a shot in front of goaltender Araya Kiminski during the third period of Tuesday night's hockey game with Proctor/Hermantown.

It's been a mixed bag of tricks to start the season for the Cloquet-Esko-Carlton girls hockey team. The Lumberjacks opened the season by going 4-1 through their first four games, opening with wins over Pine City, Duluth, Superior and Eveleth-Gilbert through last week. However, their fortunes changed Tuesday when they fell 5-1 to the Proctor/Hermantown Mirage - the team CEC beat in the Section 7A title game last season.

On Friday against Eveleth-Gilbert, the 'Jacks started quickly, taking a 4-1 lead after the first period by outshooting the Golden Bears 13-6.

'We were happy with our first period and how we started the game," said CEC coach Courtney Olin. "We have been stressing the importance of shooting when there are opportunities, and I think we executed that well against Eveleth-Gilbert."

Leading the strong start was Dana Jones, who scored 6:28 into the first period with assists to Tenley Stewart and Frankie Halvorson. Following an Eveleth-Gilbert goal at 11:30, it was Jones scoring again just eight seconds later with an unassisted goal, making it 2-1 for CEC. Jones' second goal was followed by goals from Marina Dostal and Lauren Sertich for a 4-1 score. Dostal's goal was assisted by goalie Araya Kiminski and Sertich's goal was assisted by Emma Parks and Dostal.

"Dana is very strong and has a great shot," Olin said. "We have really encouraged her to shoot when she has the opportunity, and she did that against Eveleth-Gilbert."

Things changed a bit in the second period when the 'Jacks gave up 18 shots on goal and the Golden Bears took advantage of those shots by scoring twice and cutting the lead to 4-3.

"We were disappointed in our second-period breakdowns and knew we had to clean those up, moving into the third period," Olin said. "We did a much better job with our positional play and decision-making in the third period. I think everyone was a bit emotional going into the third, but we were able to come together and play hard. This was, arguably, the most adversity we have faced, and our girls battled through it."

CEC rebounded in the third period with a pair of goals of their own. The first came off the stick of Lilly Hanson with Dostal assisting, and the second was scored by Stewart and assisted by Taylor Wick and Dostal for a final score of 6-3.

"After our delay in the start of the season, we are finally feeling like we are getting into game shape and finding a little bit of a groove," Olin said. "We are at the toughest part of our regular season schedule, and I think the next few games will be a good challenge for us."

Kiminski made 13 saves on 16 saves to secure the win for CEC.

On Tuesday night, the Lumberjacks faced off against Proctor/Hermantown in a rematch of last season's sectional championship game, but the results were vastly different, as the Mirage led it 1-0 after one period, 3-0 after two periods, and eventually won 5-1. 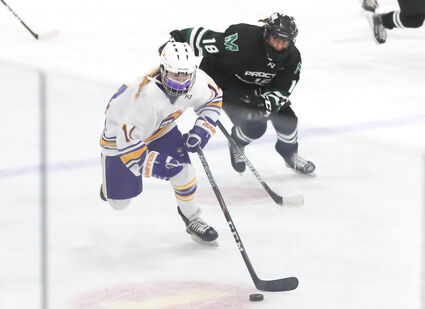 Boasting 10 seniors from a talented team last year, the second period was an even greater advantage as the Mirage outshot CEC 12-2 and scored the only two goals of the period to increase their lead to 3-0.

Third-period action saw the Mirage go up 4-0 early, but CEC's Keely Grasshorn gave the 'Jacks life with a goal at 14:49, only to have the Mirage add one more late goal for the final of 5-1. Dana Jones didn't play for CEC Tuesday.

The Mirage outshot CEC 30-18 for the game and claimed the win in the first of two meetings during the regular season between the two squads.