It's back to school again in county 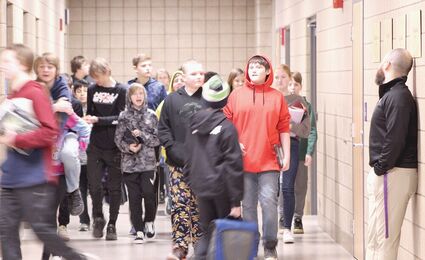 The hallways could get as crowded as they were a year ago at Cloquet Middle School just before schools shut down in 2020 ... but students would certainly be wearing masks this time around.

It's beginning to look like this school year will be a turnaround from previous school year, at least in terms of the pandemic.

Last year, students enjoyed school as usual until mid-March, when Gov. Tim Walz and the Minnesota Department of Health abruptly informed schools they would need to close March 18-27. But students never came back - the school year was finished via distance learning, with students, teachers, parents and other staff figuring things out on the fly.

This time around it may be the final months that look the most like a normal school year.

Across the county, all public elementary schools are back to full in-person learning for anyone who wants it. The situation at secondary grade levels is not as universal, but most are either in hybrid or full in-person learning. High school is more challenging because students travel from classroom to classroom, increasing the number of people that would have to be quarantined should a student test positive for Covid.

Some districts did not have to endure the long stretch of distance learning. In Barnum, students transitioned to a four-day a week in-person model in October, and that has mostly continued, even when county numbers crested this winter in November and into December. In Cromwell-Wright, all grade levels have been able to go to school fully in person except for two weeks in November. In Moose Lake, high school students went back to school four days a week starting Feb. 16, with plans to continue through March 19 at least, and a re-evaluation after spring break.

The high schools still in hybrid learning are making plans to transition back to full in-person learning as Covid numbers continue to drop and the state loosens its guidelines to get kids back to school.

Wrenshall secondary students (grades 7-12) will return to full in-person learning on March 8, with Esko on March 9, and Carlton on March 15. The Fond du Lac Ojibwe school remains in distance learning where it's been the entire year, but things could be changing there in a couple of weeks.

"I think it's important for our students [to get back to school], to give them a sense of normalcy," said board member Nate Sandman during Monday's Cloquet school board meeting, after Cary told the board that administrators were thinking it might be best to come back after spring break (March 29-April 2) so all the teachers would have had an opportunity be be vaccinated.

Of course, parents who prefer to keep their children in distance learning may continue to do so. The percentage of distance learners at the secondary level in the county ranges from 10- to nearly 30 percent.

Many high schools in the county are using a four-day-per-week model for in-person instruction and using the fifth day for teachers to connect with distance learners. For students attending hybrid or in-person learning, the fifth day is an asynchronous day, when they don't have to log into online classes; rather, they can work at their own pace from home.

"When you're managing five classes of kids in your classroom as well as five classes of kids who are also at home, without any dedicated time to make those connections, it's mass chaos from a teacher's perspective, which is why I would recommend [an asynchronous day each week]," he said.

At-risk high school students are already back in school five days a week, and that would continue. It's made a substantial difference in the number of students failing classes, Battaglia said.

Cloquet school board chair Ted Lammi asked Battaglia if he planned to offer distance learning as an additional option for the next school year if the state doesn't require it.

"Absolutely not," Battaglia said. "It's a nightmare."

Board members also pushed for an earlier date in Esko.

Board member Todd Rengo asked why they couldn't start full in-person learning earlier than March 9. "We've been waiting to get the students back in the classroom for months. Why can't we be ready for them March 2?" he asked.

"When there's a significant learning model change like this, it's wise to have two days for staff to re-adjust. Since students are off from school both Monday, March 1, and Monday, March 8, staff can use those days to plan for the students to return," superintendent Aaron Fischer said.

After some discussion, the Esko board agreed that due to transportation logistics and staff training, bringing the high school students back March 9 made more sense. Esko parents are encouraged to drive their students to school to help alleviate the low capacity of buses, which must adhere to social distance standards.

As for a return to normalcy in terms of activities, schools are making plans and fundraising for things like prom and graduation, but it will all depend on the pandemic, CHS principal Steve Battaglia said.

"We've made no commitments, we've just opened the door," he said, regarding some all-night grad party requests. "We are looking at all contingencies, including outside on the football field and in the parking lots."