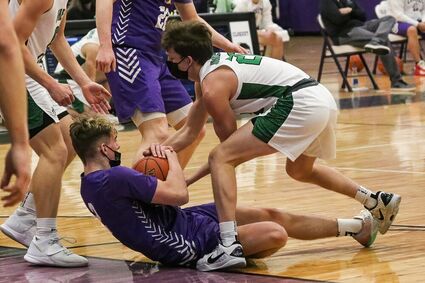 Adam Schneider fights for a loose ball, above, against Pine City and soars for a layup. He finished with 14 points. Alec Turnbull led the Lumberjacks with 21 in a 77-68 win.

It has been a bit of a roller coaster ride for the Cloquet boys basketball team this season. The Lumberjacks notched a 77-68 win over Pine City last Thursday to improve to 6-5 on the season, but now they have to prove they can put together a win streak of more than two games.

"I like where we are at," said Cloquet coach Steve Battaglia. "Four of our five losses were to teams that are favored to win their section. We're losing to good teams and we're only going to get better from here."

The Lumberjacks raced out to a 42-34 halftime lead against Pine City with a strong offense. Alec Turnbull scored 21 points, Connor Barney and Dylan Heehn added 17 points each and Adam Schneider finished with 14 points.

"Barney and Heehn are big strong kids and Turnbull and Schneider both attacked the basket," said Battaglia. "We've got good offensive balance, which helps."

The Lumberjacks got a shot in the arm when Barney was allowed to join the team after the Fond du Lac Ogichidaag season was put on hold.

"He's been with us for about three weeks," Battaglia said. "He adds a physical element that can score, rebound, and defend. He's a tough matchup for other teams and a big addition for us."

According to Battaglia, the early lead could have been even more if not for a short span just prior to halftime.

"We played pretty well. We forced contested threes, but a mental lapse in the last two minutes of the first half cost us a 15-point lead being reduced to eight at half," Battaglia said. "With the way we played for the majority of the half, we were actually a tad upset that we let them back in the game." 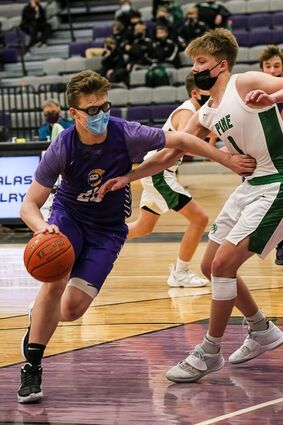 Dylan Heehn drives down the center to go in for a lay up.

The Lumberjacks also got four points from Caleb Hanson and two each from Tyler Issendorf and Jack Sorenson to round out the scoring.

"Our goal is to win the Lake Superior Conference, and that is completely within our control," Battaglia said. "Beyond that, we want to get a home seed for the quarterfinals. If you can get to the semis, that's when tournament basketball gets fun. Anything can happen and we've got the guys to make a run in March."

The Lumberjacks were heading into a streak of home games this week, celebrating Senior Night at home Thursday, Feb. 25 against Proctor. They play Virginia here at 3 p.m. Saturday and Hermantown starting at 7:15 Tuesday, March 2.

There is no general admission. Those not on the player list for games are encouraged to livestream the game online at mnsports.tv/cloquet-hs-sports, for a fee.