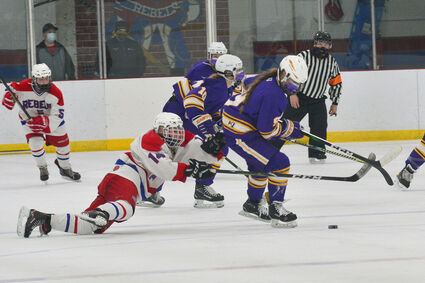 The Rebels' Mackenzie Hoffman dives in to try to knock the puck away from CEC's Lily Hanson as the Rebels and the Lumberjacks met last Friday in Moose Lake.

The first period of play between the Cloquet-Esko-Carlton and Moose Lake Area girls hockey teams Friday night was nearly dead-even. The Lumberjacks held a slight shot advantage, but the March 12 game at Riverside Arena in Moose Lake was scoreless. Things changed in the second and third periods as the Lumberjacks outshot the Rebels 24-9 in the final two periods, allowing them to notch a 2-0 road victory over the Rebels.

"After the first period we knew we were going to have to shoot the puck a lot more," said CEC coach Courtney Olin.

Things changed for CEC in the second period when lightning-fast forward Dana Jones buried the puck into the back of the Rebels net on a breakaway as she slipped behind defenders to race in on goalie Mallory Hartl for the 1-0 lead.

"This was a really fun game to be a part of," said Rebels coach Reilly Fawcett. "Our girls knew that it was a big game for our section."

The Lumberjacks, who held a 4-3 edge in shots on goals at the end of the first period, peppered Hartl in the second stanza by outshooting the Rebels 13-3.

"We were happy with the improvement and the amount of shots we were able to put on net," Olin said. "Moose Lake works extremely hard and has some great young athletes."

CEC continued their pressure on the Rebels net in the third period with 11 more shots and then were rewarded when Marina Dostal picked up a goal to give the 'Jacks a 2-0 lead.

"Cloquet is a very-well coached team and a team that never lets off the gas pedal and that's what makes it so tough, yet fun to play them," Fawcett said. "They got a couple of bounces and they were able to capitalize on their opportunities."

Much like CEC, the Rebels have a big motor and a work ethic that gives them a high level of competitiveness; in fact, they were coming off an impressive road win just a couple of days before.

"We just came off a 5-4 overtime win against Hopkins/Park," said Fawcett. "We played outside at the Recreation Outdoor Center in St. Louis Park, which is a beautiful facility. We are finally coming together as a team and everything is starting to click."

Over the weekend seedings were announced for the upcoming Section 7A tournament. The Proctor/Hermantown Mirage were seeded No. 1, Marshall picked up the No. 2 seed, CEC was the No. 3 seed, Eveleth-Gilbert was seeded No. 4, the Rebels notched the No. 5 seed, it was North Shore going at No. 6 and International Falls is the No. 7 seed. 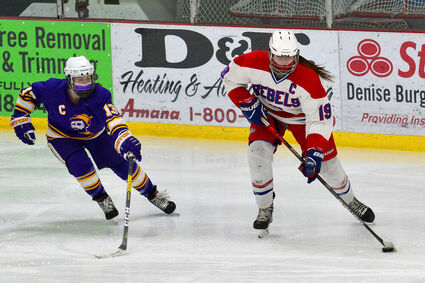 Moose Lake Area girls hockey defeated Eveleth-Gilbert 3-2 in overtime Tuesday night, which puts them in a quarterfinal game against Proctor/Hermantown at 6:30 p.m. Thursday.

CEC is the defending Section 7A champion, and placed third in the Class A state tournament last year.