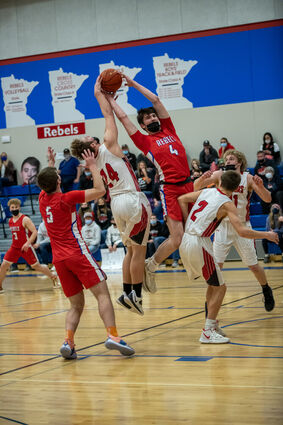 The Moose Lake/Willow River boys basketball team was set to face Pequot Lakes in the Section 7AA boys basketball championship game Thursday night, after the issue of the Pine Knot News was printed.

Their next game, against No. 6 seed Pierz on Friday, March 19, was more challenging but the Rebels fought to the win with a score of 59-58. Against Pierz, the Rebels were led by Brady Watrin with 17 points. Landin Kurhajetz scored 16, Mason Olson 10 and both Logan Orvedahl and Carter Johnson finished with eight points. Conner Welch added three points in the win.

"It was just a back-and-forth game," said Wes Cummins, head coach of the Rebels. "We built up a 17-point lead, but then they would go on a run and cut it to five, and it went that way the whole game.

The Rebels led the game 43-28 at halftime and much of that had to do with Mason Olson, who scored a game-high 32 points.

"Mason could have had 40 points tonight," Cummins said after the game. "Marshall tried to deny passes and stretched things out on defense, but when you shoot the ball like we did that's tough to defend."

Also in double-digit scoring for the Rebels were Logan Orvedahl with 16 points and Carter Johnson, who added 13 points. 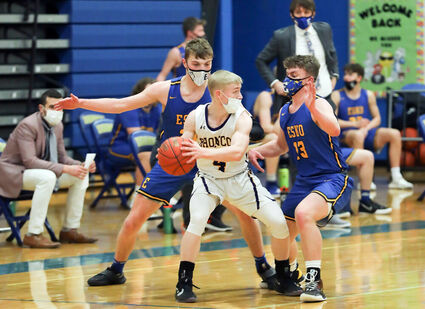 "Johnson had an unbelievable game for us and 13 points doesn't do justice to the game he played," said Cummins. "He shot the ball well, but his defense was really good."

In other Section 7AA action, the Eskomos had a good run, but fell to No. 1 seeded Pequot Lakes 74-54 in a semifinal Tuesday.

Esko defeated Proctor 62-46 in the first round on March 17. "Riley Fischer and Eli blue both played well against Proctor scoring 19 and 20 points," said Esko coach Derek Anderson. "Cuinn Berger also had 13 points for us in the win."

They went on to beat International Falls 80-42 in a quarterfinal game Friday, March 19. Against the Broncos, Riley Fischer had 25 points.