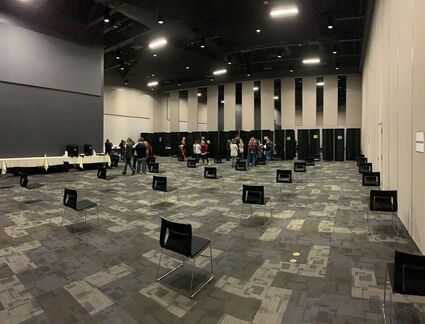 Physical distancing was observed at the vaccination event at Black Bear Casino Resort last week. The convention center was transformed into a vaccination clinic last Thursday. A total of 455 people received the first of a two-shot Covid-19 vaccine and will return for a second on April 29.

People streamed in and out of the convention center at Black Bear Casino Resort last Thursday, eager to take another step toward a post-pandemic life. By the end of the day, another 455 residents of Carlton County and members of the Fond du Lac Band of Lake Superior Chippewa had received their first doses of the Covid-19 Moderna vaccine.

The event came in a partnership between the band and Carlton County and was staffed by workers in the health departments from each. The Fond du Lac Band contributed a total of 500 vaccine doses for the vaccination clinic, following the state's decision to open up vaccinations for anyone age 16 or older.

Samuel Moose, director of FDL Human Services, explained that the band has been getting a good supply of vaccines from the state and wanted to reach as many people as possible.

"We had 500 doses sitting in the refrigerator and set up this event for the tribe and the EOC (Emergency Operations Center) to meet our strategy of making the community safe," Moose said. "We also wanted to open up vaccinations for community members and get more people in the county vaccinated. We do a lot of business with people in the county. That was part of our mitigation strategy."

On Thursday, people were directed where to enter the building and asked to observe social distancing and mask recommendations as they stood in line to register. They had their temperatures checked at the door to the convention center, signed in and were directed to curtained cubicles, where they were given the vaccine in private. After receiving the vaccine, the vaccinated waited for 15 minutes in another section of the auditorium to see if they had any allergic reaction before they left the building. Five nurses from each agency administered the shots.

Another clinic will be held at Black Bear on April 29 for people to get their second doses.

Meghann Levitt, public information officer for Carlton County Public Health, said people did not have much notice to sign up for the vaccinations on Thursday.

"The clinic happens pretty quickly," she said. "We got the word out and people had only from Monday morning to call and sign up. Walk-ins were welcome too. But the people that called and registered were grateful for the opportunity to get the vaccine. Many of them said that they could see their grandchildren again."

It was an excellent, although not a record turnout. A drive-

thru county flu clinic that served 700 people in September 2020 wins that prize, but Carlton County public health and human services director Dave Lee said the county's weekly drive-thru Covid clinics in Barnum have been serving up to about 370 people a day.

Moose said members of the tribe have been taking advantage of the supply of vaccine on the Fond du Lac Reservation. "Our elders group definitely showed a lot of leadership," Moose said. "They were a model for us."

"The younger people are a little more difficult to reach," Moose said. "We also gave the vaccine to people with certain medical conditions as part of our strategy."

Levitt said Thursday's shots were limited to people 18 and older because that is the age limit for the Moderna vaccine. Younger people ages 16 and 17 can get the Pfizer vaccine, which is available in Cloquet at Community Memorial Hospital, among other places.

There is no charge for any Covid-19 vaccine, although people are asked to give insurance information if they have it.

Moose said the number of people who came to receive the vaccine last Thursday was gratifying.

"This event is really exciting," he said. "It is showing what we can accomplish with this convention center. It has double the capacity of other centers and the number of people is flowing well."