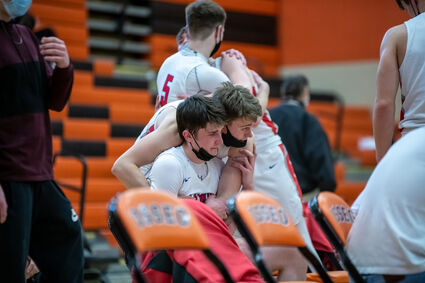 Moose Lake/Willow Rver players console each other in a season-ending loss to Minneapolis North last week in a state Class AA quarterfinal game in Osseo.

Midway through the first half of their state quarterfinal game, the Moose Lake/Willow River Rebels trailed by four points. That changed as Minneapolis North went on an offensive run that gave the Polars an 11-point halftime lead and eventually a 71-40 victory in the Class AA game in Osseo.

"Minneapolis North is an incredibly talented team," Rebels coach Wes Cummins said of the top-seeded team. "We knew that a number of things had to happen for us to be competitive. One of those things was getting back on defense. Our guys got a little gassed at the end of the half and gave up some quick transition layups."

The Polars are a deep team with a ton of talent. "They are extremely talented and they have five Division I players," Cummins said. "We have exactly zero Division I athletes. So just looking on the surface, it's a tough matchup for us. At every position, they were taller and more athletic. To make up for that discrepancy, we knew that we had to shoot well and play with some grit."

Both teams like to get up and down the court.

"Like us, they like to get out, run, and play a fast-paced game," Cummins said. "Much like the Pequot game, we knew that it would be disadvantageous to try to play that kind of game. They are also extremely big, so we had to force them to shoot jump shots and hoped for a poor shooting night."

Unfortunately, the Rebels had to deal with a lineup that not only included speed, but size - with four players over 6 feet 6 inches tall.

The Rebels had a hard time scoring, he said, so North never had to bring another defender. "This, coupled with a poor shooting night, didn't help."

The Rebels found themselves down 32-21 at halftime. In the second, the Polars hit the gas pedal and outscored the Rebels 39-19.

"Defensively, I felt that our guys played fantastic," Cummins said. "If you take away a few garbage time buckets, we held them in the 60s. That's the best we could hope for."

Mason Olson had an impressive night, leading all scorers with 19. Both Logan Orvedahl and Phil Sheetz had six points. Carter Johnson added five points and Brady Watrin chipped in four.

players in double-digit scoring and were led by Davon Townley's 15 points. Marcus Owens and Andre Gray each had 12 points while De'Meiko Anderson had 11. 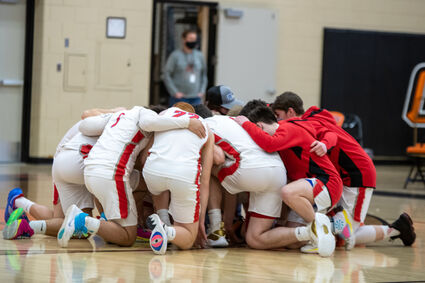 "This truly was a season to remember," Cummings said. "With everything going on the world, it felt like we were able to escape for at least part of the day when we stepped in the gym."

Moose Lake/Willow River wrapped up the season at 18-4 and made the program's second trip to the state tournament in its history.

"From afar, it looked like we were highly successful all season," Cummins said. "Behind the curtains, we had our battles and problems. Every season is a rollercoaster. As a coach, you just hope that your season ends on a high note."

The successes came from a culmination of years of work, he said. "These boys did everything we ever asked of them. I couldn't be more proud."