Wilderness seek to move from middle 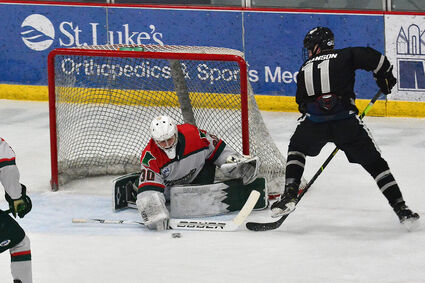 Minnesota Wilderness goalie Jacob Zacharewicz makes a save on a breakaway shot attempt from St. Cloud's Peyton Hanson as the Wilderness blanked the Norsemen 5-0 March 31 in Cloquet.

With about a third of the schedule remaining in the regular season, the Minnesota Wilderness find themselves smack in the middle of the Central Division standings in the North American Hockey League. The Wilderness are in fourth place - 10 points out of third place in the division.

A big thorn in the Wilderness' side has been the Aberdeen Wings, but that could be said about every other team in the NAHL because Aberdeen is sporting a gaudy 39-3-1 record - the likes of which are seldom seen in the junior hockey league. Aberdeen beat the Wilderness on March 26 and 27 by scores of 3-2 and 6-2, and then by 3-0 scores April 2 and 3.

"I believe they are extremely disciplined in their structure in all three zones," said Wilderness coach Jon Vaillancourt of the Wings. "They compete hard up and down the ice as a five-man unit, and this makes them extremely difficult to capitalize on when they make a mistake."

Prior to the losses to Aberdeen, the Wilderness rolled to three straight wins over the Chippewa Steel by scores of 3-2, 3-2 and 1-0, in an odd twist of fate which saw the teams play three consecutive nights in a row.

"We have great goaltending this season with (North Dakota commit) Kaleb Johnson and (Brown commit) Jacob Zacharewicz," Vaillancourt said. "We acquired a few younger defensemen that we believe will be outstanding players for us down the road and we have a younger group with our forwards. The veteran players we have from last season - Mitchell Allard, Gavin Rasmussen and Jacob Herter - been great leaders for us."

The Wilderness have been led in offensive production by defender Grant Docter, who has 11 goals and 18 assists for 29 points. Second in scoring is Mikol Sartor with 8 goals and 10 assists good for 18 points and third in scoring is former CEC forward Gavin Rasmussen, with nine goals and seven assists for 16 points.

"We aren't capitalizing on chances right now, which is one of the struggles when you have many young forwards, but I believe we are starting to find our own," Vaillancourt said. "Our power play has struggled thus far and if we want to be a post-season team, that is one area we will be improving on. Grant Docter has really started to find his game since January. We are really excited in the direction he is moving in. We also have a strong leadership group with Mitchell Allard, Jacob Herter and Grant Doctor as our captains." 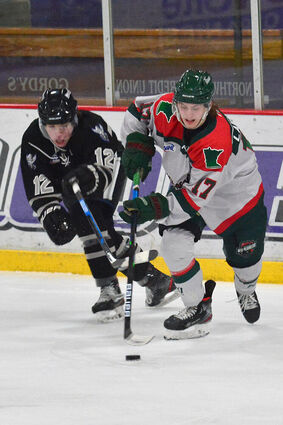 On March 31, the Wilderness downed former Cloquet star Cory Millen's St. Cloud Norsemen by a 5-0 score. The game was scoreless until late in the first period when the Wilderness picked up back-to-back goals from Docter and Brenden Poshak as they built a 2-0 lead after the opening stanza. Former Greenway star Donte Lawson added a tally in the second, and then in the third period it was Will Traeger and Sartor who scored for the final of 5-0.

Zacharewicz finished with 31 saves on 31 shots to pick up the shutout win.

"We like the way our guys have been playing. Every game is a hard game for us and we need to continue to make improvements in the right direction," Vaillancourt said. "The remainder of our games will be played at home, which is exciting for us. We love playing for our fans."