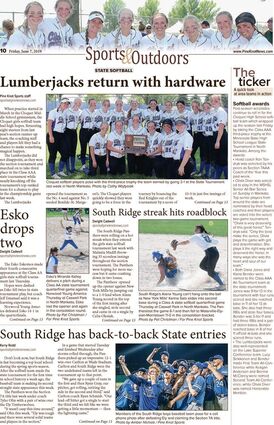 When the pandemic canceled all spring sports in northern Minnesota last year, it also took away the chance for a repeat trip to state for three local softball teams: Cloquet, Esko and South Ridge.

Last year's seniors didn't get to prove their mettle on the diamond, but there are still players on all three teams who played for those 2019 state teams. In a week that saw the first softball games postponed for weather rather than the pandemic, Pine Knot News sports writer Kerry Rodd reached out to find out how these three teams are doing.

The Cloquet softball team made an epic run to the Section 7AAA championship in 2019, and their season culminated with a third-place finish in the Class AAA state softball tournament. Since then, the 'Jacks hired a new coach - longtime coach Ron Tondryk retired after the state tournament run - only to have that coach leave after one season, a season that was never played due to the pandemic.

This season the Lumberjacks return to the field with a familiar face at the helm. Tyler Korby, an assistant coach in the Cloquet program 2010 through 2017, is back - this time as the head coach. Korby is excited to keep the winning legacy of the 'Jacks on track.

"Being a head coach is a dream job. There's nothing more I love doing than working with kids in the classroom and on the field," said Korby. "I can't help but just smile, because there's no place I'd rather be than on a diamond in the Cloquet colors."

Korby is also a fourth-grade teacher at Churchill Elementary School as well as an assistant coach for both volleyball and girls basketball. In the summer he is the director of Minnesota Blast, the northern Minnesota traveling softball program based in Cloquet.

Korby was hired in February, so it's been a busy time for him and his staff as they sort through practice schedules and other assorted items as they move forward to this season.

"After these first two weeks [with many practices] in the gym, we've been outside just twice, and the girls are excited and itching to go," Korby said.

As for the Section 7AAA championship, Korby said the girls "are looking forward to the challenge of defending what's theirs."

According to Korby, Cloquet will also get nice innings from senior outfielder Morgan VanReese, junior infielders Justice Paro and Sophie Diver, and sophomore infielders Roena Diver, Jordyn Sorenson and Lexi Goranson. CEC girls hockey goaltender Araya Kiminski is also on the squad, along with Ashley Austin, and both are fleet-footed sophomores who will also contribute.

"We have an extremely versatile group of multi-sport athletes," said Korby. "Many play two or three sports, which plays into our advantage. We have a good mixture of speed and power, which will allow us to be creative at the plate and aggressive on the base paths. We'll have the capability to constantly put pressure on our opponents, and we won't hesitate to push the pace."

The Lumberjacks were scheduled to open the season on Monday against the Eskomos, but the game was rained out and reset for 4:30 p.m. Thursday at Esko.

In 2019, the Esko softball team made another strong run under coach Jeff "Huff" Emanuel that culminated in another state tournament appearance. With three starters returning from two years ago and a host of other talent, the Eskomos have a very good chance to win the Section 7AA crown again.

"We have had some very good teams here, and a lot of these girls were part of those teams, but this year there feels like a different motivation," Emanuel said. "We are deep, 12-13 players deep. Some of the spot starters would be starting regularly on most teams, which keeps a healthy competition amongst this group."

Three significant starters will return from the 2019 section championship team. Senior Miranda Kelley returns as a pitcher and junior Jayden Karppinen as catcher. Senior Lily Hanson, who played second base in 2019, has been converted to shortstop this season.

"We will also return Zoie Johnson and Brenna Stark, both seniors who play the corners and second, as well as Kaitlyn Adkins and Maya Emanuel, who are juniors and were involved in our 2019 run as well," Emanuel said. "Our seniors are our leaders; like every team, they control the team's motivation and energy levels for sure."

The team motivation will come from Karppinen, Stark and Kelley, according to Emanuel.

"It is always a beautiful thing for a coach to have someone like Jayden Karppinen on the field," Emanuel said. "We have slowly given her more and more responsibilities through the years. Now, as a junior, as her confidence continues to grow, the more responsibility she wants, and is handling with flying colors."

According to Emanuel, Stark is the ultimate team player. He said Kelley would run through a brick wall to get a win on the mound and is the player the team feeds off of for its energy.

"This group is like no other because no other team I have coached has gone through a missed season due to a pandemic, but the drive to continue the winning tradition in Esko softball is even greater than the past," he said.

Esko was scheduled to start its season hosting Cloquet on Monday, but that game was rescheduled to Thursday.

The last time the South Ridge Panthers were on the field, they were playing at the Minnesota state high school girls softball tournament. Since then, Covid hit, their coach retired, a new coach was hired but never got to coach a game, and now yet another coach, but an old face at the school, is at the helm.

Longtime University of Wisconsin-Superior coach Roger Plachta guided the Panthers to their first state tournament berth in 2019 after coming over from the college ranks. After Plachta retired, former AlBrook coach Steve Jezierski was hired. After the pandemic hit, Jezierski elected to not return to coaching - which put the Panthers in a dilemma.

At that point Panthers athletic director Tony DeLeon reached out to volleyball coach Brad Olesiak to take the reins.

"Tony asked me to do it," Olesiak said. "Celia, my middle daughter, said she would help. She was a senior on the team that went to state and was hired as an assistant coach."

Three starters - Alana Young, Mary Lisic and Adella Olesiak - remain from the 2019 state team. Lisic and Young are seniors and Olesiak is a sophomore.

"Practice is going well," said coach Olesiak. "We were excited to get outside last week and practice. Shortstop Alana Young and (outfielder) Mary Lisic have been starting since eighth grade. Adella Olesiak, who is an outfielder, has started since eighth grade as well."

The numbers for the program are down. With only 16 girls out for the squad, there was an early concern that the Panthers might not be able to field a team. But the players and their new coach are still excited about their prospects this season.

The Panthers will also rely on Rylee Young at catcher, Phylicia Preston in the outfield and freshman Svea Snickers on the mound this season.

"We are excited to be back on the field," said Olesiak. "We don't have any pitchers that have pitched at the varsity level, so we are a little thin there, but they are working hard and should do well. We have a good core and hope to compete every night."