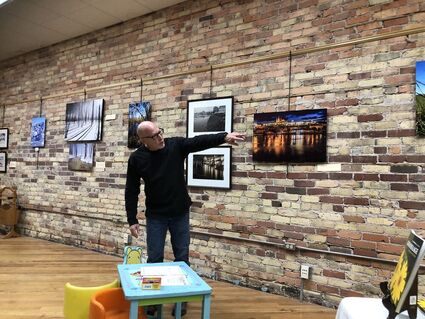 Local photographer Mark Cline explains photo technique during the December 2020 art show opening at the Pine Knot News gallery in Cloquet's West End business district. The in-office gallery is an example of locally inspired and arts-activated community development and will hold its next art show in May.

After a yearlong delay due to the pandemic, the "West End Flourish" is once again back on track to celebrate arts and community. The project aims to revitalize Cloquet's West End business district and will feature the works of more than two dozen local and regional creative artists over the next 20 months as they imagine the West End of Cloquet as their canvas.

Artists of all types - ranging from painters, sculptors, actors and dancers to musicians, writers, photographers and filmmakers - are invited to register for and attend the virtual "Artist Workshop-West End Flourish" online event scheduled for Thursday, April 29, from 3 to 6 p.m.

The free workshop will offer artists information about how to apply for a commissioned artwork grant to fund their proposed West End Flourish projects. There will be grants of $1,000 each to the 15 artists whose projects are selected for this year's round, as well as $1,000 to each of 10 additional artists in 2022.

Key to Cloquet's successful application in 2019 was the collaboration between Cloquet Community Development director Holly Hansen and Emily Swanson, of the Oldenburg Arts and Cultural Community.

Swanson has been working with the city of Cloquet to bring "the Flourish" to life.

"People will have a month to get their proposals into the selection committee which will then meet and make their announcements by the 15th of June. Then artists will start their projects, to be presented any time between July 1 and December 15," Swanson said.

Swanson sees artists as having a special role, and right now as a special time, in restoring and rebuilding communities. Swanson said, "One of the things that struck me about the pandemic was the way artists kept us going. We saw opera singers in Italy singing to first responders, local musicians making videos to keep us on the sunny side, even kids doing shows with their teddy bears. There was so much creativity all around to keep us going."

"Times like this are when you really want creatives to point to the future. They have a special gift for helping us see a positive future," she added.

Hansen reflected on a nearby success story in Duluth.

"Lincoln Park is an example of intentionality in working to make one (area) a different type of destination in a city," she said, describing Cloquet's West End business district as "a gem of a location that has had a blind eye turned to it, that has vacancies, that has had blight, that needs to be revitalized.

"It's got untapped potential," she said. "Why not let some artists throw in their energy and see what comes from it?"

The West End Flourish initiative is an Artists on Main Streets program made possible by Springboard for the Arts and Rethos, two organizations dedicated to the revitalization of Minnesota communities through the arts.

Sarina Otaibi, rural programs manager at Rethos, told the Pine Knot News that Cloquet was one of only four Northern Minnesota cities selected out of the 40 cities that applied for this round of Minnesota Main Street communities. Also selected were Cook, Mahnomen and Two Harbors, making Cloquet the largest city in this year's cohort.

"This is the first time we've had communities up in the northern half of the state participate in the Artists on Main Street program, and that's what we wanted when we started this program, Otaibi stated. "Our goal since 2018 has been to work in 11 Minnesota communities as a part of our grant from the Bush Foundation," she added.

Artists who would like to participate in the West End Flourish should visit https://oacc.us/programs/west-end-flourish, find OACC on Facebook, email [email protected], or call the Oldenburg House at 763-226-6828.