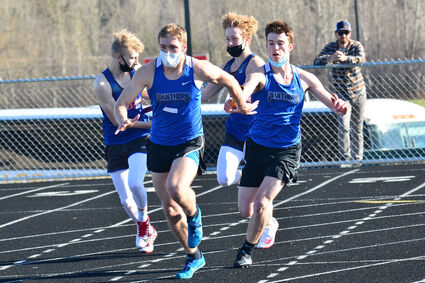 South Ridge's Isaiah Foster (right) makes the baton handoff to Tyler Anderson during the 4x100 relay race Thursday afternoon in Esko. Both plan to be track teammates at the College of St. Scholastica next year.

It took a year, but local track teams got a chance to show their abilities last Thursday when many of the smaller county school teams participated in an early season meet hosted by the Eskomos.

"We had six teams total: ourselves, Carlton, Moose Lake-Willow Ridge, South Ridge, Wrenshall and Cromwell," said Esko girls coach Matt Peterson. "It felt great to be back competing in a track meet after losing our 2019 season due to Covid. You can see it every day in practice, our kids are enjoying not only track, but just being able to be kids again."

Like most first meets of the year, there were not a lot of personal bests, but that was not the case in the boys discus. Esko's Gage Stankiewicz launched a massive throw of 151 feet. Stankiewicz also grabbed first with a throw of 44 feet, 5 inches in the shot put.

"It was a typical first meet, with very few exceptional performances," said Esko boys coach Gary Beaudot. "Gage Stankiewicz's 151-foot discus throws was a PR [personal record] and probably one of the top throws in the state for this early, so that was impressive."

Deekon Anvid of South Ridge was also impressive Thursday, finishing second with a toss of 133 feet and two inches.

The winner of the girls 100-meter dash was Esko eighth-grader Kaitlyn McConnell, with a time of 13.45 seconds.

"McConnell finally got a chance to run in a track meet and ended up winning the 100," said Peterson. "We felt coming in we had a talented group of kids. If they continue to have fun together and work hard, they could by the end of the season end up being pretty special."

The winner of the boys 100 was Caden Robbins of Moose Lake/Willow River, who bolted to a time of 11.69, just a body-length better than his teammates Jackson Thompson and Grant Pettit.

In the boys 200-meter dash, Pettit returned the favor by blazing to a time of 24.32 - just good enough to get him the win, with South Ridge's Tyler Anderson close behind at 24.62. The Rebels' Skyler Thompson raced to first place in the girls 200 with a time of 29.13, with Jordan Ellefson of South Ridge finishing in second at 29.17.

Noah Foster of Cromwell-Wright showed that he will be a force come section time, as he blew away the field in the 400-meter dash with an impressive time of 54.90, almost two seconds faster than the runner-up. Things were a bit closer in the girls 400 with Cromwell-Wright's Silena Anderson just edging out teammate Emaleah Olesiak to grab the win.

One of the most impressive runs of the day came in the girls 800-meter event when Amelia Olson of Moose Lake/Willow River flew through two laps in 2:45:24 - a whopping 13 seconds faster than runner-up Emma Cid of Carlton. Esko's Jordan Chopski also had an impressive win by running a 2:14:89, almost four seconds faster than his teammate Nate Rengo who was the runner-up.

Another impressive run took place in the boys and girls 1600-meter event. On the boys side, ninth-grader Jack Riley finished in 5:07:68, while Esko's Grace Hrabik won for the girls in a time of 6:10:82.

Cromwell-Wright athletes Noah Foster and Emaleah Olesiak provided the fans with something to talk about when they blew away their respective fields in the 3200-meter run. In fact, they were so dominant that one had to wonder if the lap counters were all on the same page. Olesiak ran the 3200-meter in 12:51:22 - over a minute-and-a-half ahead of the second-place finisher - while Foster ran a time of 10:32:08, which was 30 seconds faster than the runner-up.

Tanner Collman of Cromwell-Wright captured first in the boys 110-meter hurdles while Dylan Edland of Esko was the boys 300-meter hurdle winner in a tight race with Tony Cummings of South Ridge. Allison Thornton of Esko won the girls 100-high-hurdle race, and Esko's Thornton was also a double winner as she took first in the high jump with a jump of 4 feet, 10 inches. 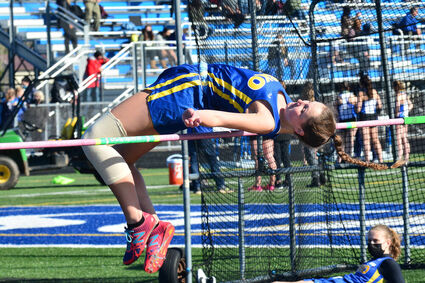 Esko's Allison Thornton makes it over the bar during the high jump competition during Thursday afternoon's track meet in Esko.

Esko dominated the 4x200 relay, winning both the boys and girls races. In the 4x800 relay it was the Moose Lake/Willow River boys winning, and the Carlton girls taking first on the girls' side. The 4x100 boys relay winner was South Ridge, while Esko was first in the girls race.

This year it's the weather more than Covid-19 putting a damper on some of the spring meets. But Covid is still a consideration.

"It was more work than normal to put on a meet for sure," said Esko boys track coach Gary Beaudot. "It is quite daunting following all of the guidelines by the MSHSL. It was a bit awkward, but we did our best to keep kids distanced and safe."