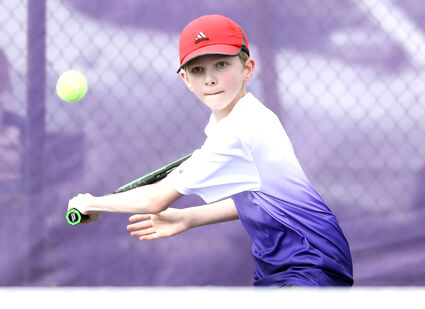 Cloquet tennis seventh-grader Ethan Lavan hits a backhand shot during his match in Thursday's meet with Hermantown. Lavan had the sole win against Hermantown at No. 4 singles when he defeated Ben Kangas 6-3, 6-1.

After losing last year to the pandemic, it's been a bit of a struggle for the Cloquet-Esko-Carlton boys tennis team early in the season. The Lumberjacks are 0-5 in matches so far and lost a pair of matches last week to Hermantown and Grand Rapids.

"We are an inexperienced team," said CEC coach Derek Johnson. "We have a lot of new guys on the roster after not having a season due to Covid last year."

The boys team has just two returners - Adam Blesener and Ethan Doty - from two years ago who have varsity experience.

Against Hermantown, the 'Jacks fell 6-1 with their lone win coming at No. 4 singles when Ethan Lavan of CEC defeated Ben Kangas 6-3, 6-1.

The Hawks swept CEC in doubles competition. It all started at No. 1 doubles with Zam Plante and Aaron Evjen downing the CEC duo of Jonah Bryan-Nikko and Ty Wolter 6-2, 6-1. At No. 2 doubles the Hermantown duo of Sam Swenson and Max Plante defeated CEC's Tyler Leppi and TJ Sabyan in a shutout 6-0, 6-0. The Hawks No. 3 doubles team of George Peterson and Ely Young defeated Max Sundquist and Joey Bender 6-1, 7-5.

Earlier in the week the Lumberjacks fell 6-1 to the Grand Rapids Thunderhawks. CEC's lone win again came at No. 4 singles when Ethan Doty defeated Joe Suther of Grand Rapids 6-2, 6-4. 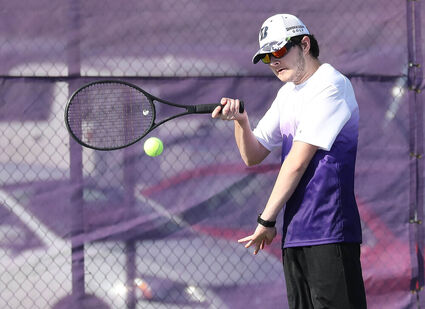 In doubles play the CEC No. 1 team of Tyler Leppi and Jonah Bryant-Nikko were beaten 6-0, 6-2 by Luc Dulong and Blayne Mortenson. At No. 2 doubles, the 'Jacks team of Max Sundquist and Joey Bender were beat by Zachary Lagergren and Caiden MacLean 6-1, 6-2. At No. 3 doubles, the CEC team of Sam Bailey and Marco Zegan were beaten by Jens Kahdahl and Dylan Henrichsen 6-2, 6-2.

"Our young guys, such as seventh-graders Ethan Lavan and Joey Bender, and eighth-graders Max Sundquist and Marco Zegan, have been a nice spark to our team," said Johnson. "They have been very coachable and very excited to learn the game. Each match we are taking the positives from them and learning from the mistakes we make on court."