Who is Sam Kavanaugh? 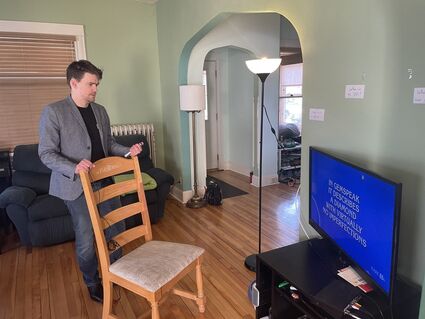 Carlton Class of 2009 grad Sam Kavanaugh has been practicing for the Jeopardy! Tournament of Champions throughout the pandemic, setting up his own mock studio at home with a chair acting as the lectern, bright lights and with a makeshift buzzer.

When the pandemic suddenly made Minneapolis substitute school teacher Sam Kavanaugh jobless, the Carlton High School alumnus turned it into an opportunity.

He went full "Olympic mode" with his training for the Jeopardy! Tournament of Champions, set to air May 17-28. A total of 15 competitors, including Kavanaugh, face off for a $250,000 grand prize.

Kavanaugh, who won a total of $156,202 on the popular quiz show in 2019, already had a pretty good idea of what it takes to win and it's more than a few stacks of flash cards (although those really do help).

"Because I was one of the first people in the pool of contestants [for the champions tournament], I was watching all the games. So I knew who all my competitors were going to be, one at a time as they came up, and I realized pretty quickly that I wasn't going to be the most knowledgeable person there," he said, pointing out that the top contestant won 19 games versus Sam's five. "But given that I had the time, hopefully I could be the most prepared."

He took it waaaay seriously. The kitchen and living room area he shares with two roommates were almost wallpapered with maps and lists of facts. He created stacks and stacks of flash cards. Like he did as a youngster when he was just a fan of the show, he played along at home, using a chair as the lectern, pointing bright lights at his face and using a makeshift buzzer. He even dressed similarly.

Kavanaugh prepared mentally too. The Jeopardy! veteran broke down all the different elements of the game and created ways to practice for the show. He developed drills for wagering on clue selection, and analyzed himself and other players to identify and shore up his weaknesses and to figure out how to most effectively play against those opponents.

To deal with his weaknesses in pop culture and remembering names of the rich and famous, he used digital flashcards, with a picture of a face on one side and the name on the back. He acquainted himself with a wider variety of movies and music. His roommates and girlfriend, Jess, also helped him practice and study.

The Carlton grad also built on the skills he already had. Being the son of teachers got Sam Kavanaugh off to a good start. Spending the first four years of his life in Australia made him curious about other places and cultures, as did growing up with a father (Ed Kavanaugh) who taught geography, and a mother (the late Jane Kavanaugh) from Australia. Going to school in the small school district of Carlton was a big factor too, he said, because he got to be part of so many different extracurricular activities, from Knowledge Bowl to football and track to theater.

Even being a teacher has helped him prepare.

"There's no more hostile crowd than a group of 14-year-olds, but I have fun with it," he said, when asked if any students ever recognize him. "Sometimes if we finish the lesson with time to spare, I will let the kids know I'm studying for the tournament and I'd tell them they could leave early if they could point out two countries on the world map and stump me for the capitals two times in a row."

He didn't lose often, but now he'll never forget the capital of Togo. It's Lomé. And all the kids in that class learned that too.

Being in the tournament was quite different than his previous experience on the show. No. 1, he's a champion now, so Kavanaugh didn't have to pay for his own airplane ticket or hotel this time. Second, the show was taped during a pandemic, so contestants were sequestered in the Wheel of Fortune studio when they weren't playing, at least 6 feet away from each other. Third, there was a different host because Alex Trebek died of pancreatic cancer in November 2020. Former Jeopardy! champion Buzzy Cohen hosted the tournament. Trebek was definitely missed, but Kavanaugh said he was the kind of host who tried to bring out the best in everyone rather than being a "star."

Kavanaugh said Cohen had a little "showman vibe" and knew the material well. 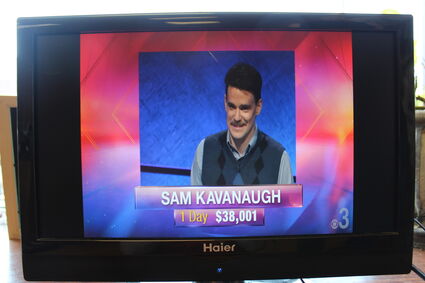 "A big part of success in that show is buzzing in on time. Because Alex Trebeck passed away, we didn't know what Buzzy's cadence was going to be like," Kavanaugh said. "But I think we all agreed that he did a pretty remarkable job of being close to how Alex used to say things."

Although the tournament airs later the month, the show was taped in March. So Kavanaugh already knows what happened, but he's been sworn to secrecy.

When asked, he just tells people they should watch the tournament.

"It's worth watching all the shows, so you can get a sense of what's gone before," he said.

Anyone who wants to make an occasion of watching the Tournament of Champions is encouraged to head to the Streetcar Restaurant in Carlton, owned by Sam's aunt and uncle, Rob and Teresa Kavanaugh. All the TVs will be tuned to Jeopardy! there.