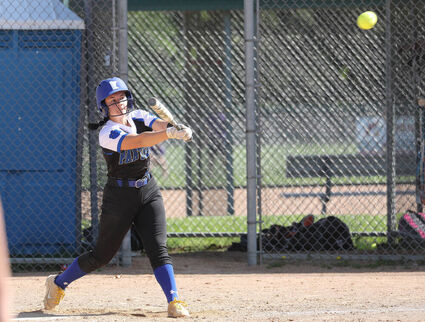 The South Ridge girls softball team picked up another important section win Tuesday night when they downed the Wrenshall Wrens 13-0.

"Their pitcher (Kent) throws hard and she is just a good pitcher," said Panthers head coach Brad Olesiak. "We got some important hits at the right time, and we are getting better."

The Panthers scored three runs in the first inning and then added single tallies in the second, third and fourth innings, a pair in the fifth and then exploded for five runs in the sixth inning to end the game via the 10-run rule.

"Our kids played hard, and in some ways I thought we did better than I anticipated," said Wrens coach Anna George. "I know our kids seemed to come out a bit flat, but they kept fighting and it just slowly got away from us."

While Kent has been a well-known commodity in local pitching circles, the Panthers' Adella Olesiak has been quietly making her own way in the circle. On Tuesday, Olesiak faced only two batters over the minimum and gave up only two hits.

"Adella is not an overpowering pitcher and the other teams put the ball in play against us," Olesiak said. "We need to play good defense behind Adella, and we did that against Wrenshall."

Most notably, the play of third baseman Alanna Young and shortstop Mary Lisic was on display in Tuesday's game as the duo made numerous highlight reel catches to thwart the Wrenshall offense.

"I thought their third baseman and shortstop were very good against us," George said. "They both made a number of plays that were impressive and kept us from getting our offense going."

Olesiak and Svea Snickers are normally the table setters for the Panthers, but on Tuesday Alanna Young's bat came alive as she smacked out a pair of hits against the Wrens.

"Alanna has struggled a little with the bat this year, so it was really nice to see her come through," said coach Olesiak.

Kent tried to do what she could to keep her team in the game, but it wasn't enough against a solid Panthers squad.

"Brooke got on every time in the game that she batted, but we couldn't drive her in. She got a double in the first inning, a single in the second and then got hit by a pitch later in the game," George said. "I think we just made some errors and it cost us, and then we couldn't score, so that just made for a tough game." 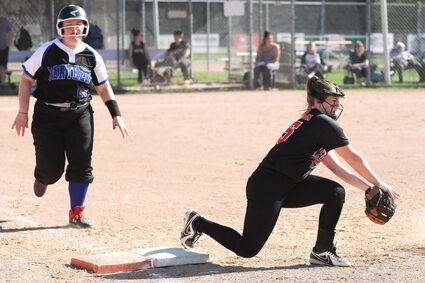 The Panthers are on the cusp of being one of the better teams in the section. With a little help from the bottom of the lineup, they could surprise in the playoffs next week.

"We're getting better, and the bottom of the lineup needs to come through for us," said coach Olesiak. "We need to get the bats going and we have got to score and get more hits when we get into playoff time, but we are getting better and we just have to keep working."

Those sentiments were echoed by George.

"We are definitely improving and getting better," said George. "I told the girls early this season we need to be able to learn to put the ball in play, and we are getting better at that."