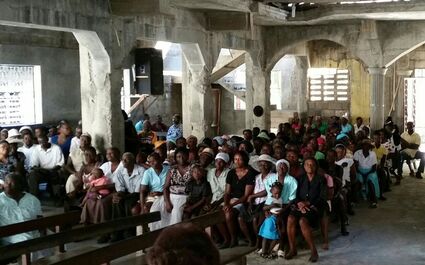 Imagine you have a child, whose life depends on getting a daily dose of medication that is available, but you can’t afford it. Just $1 a day could make a difference between life and a slow decline toward death.

That’s a situation Dr. Emmanuel Mareus, aka “Doctor Manno,” sees too often at his medical center and mobile outreach clinics in Haiti. “Diabetes is not a disease that will kill you, like cancer,” he said. “And as a parent, you know that, but can’t afford this.”

Mareus spoke in the dining room at Vicki and Terry Anderson’s house, where he was meeting with some of the core members of a local group that has been working with the Haitian doctor for seven years. They’ve essentially adopted Mareus and his Sante 2000 Clinic in Limbé (pronounced lamBay), in northern Haiti.

Known as the Ministry in Medical Mission, the volunteer Christian group organizes trips to Haiti at least once a year, usually for two weeks at a time, to run mobile outreach clinics with Doctor Manno. They also fundraise for supplies, and to help with the need for diabetic treatment there. Currently Mareus is here visiting and making the rounds of local churches and service organizations that have previously supported his clinic and its mission to help the poor with health issues.

Doctor Manno treats people with many different diseases and ailments, but he has a passion for treating diabetes, he said, because it is so prevalent and misunderstood there.

It isn’t always those who eat too much who struggle with diabetes, he explains. Diabetes is rampant in Haiti, but obesity isn’t. Out of 500 diabetic patients, he has one who is overweight.

Cloquet’s Mary Krohn, who has been to Haiti several times, said the theory is that children who are malnourished often develop diabetes later, because it affects their pancreas.

“Half the people who are diabetic don’t know, it might be five or 10 years. Maybe your symptoms are so obvious, maybe they go from peeing two times a night instead of one. It’s the new normal,” Mareus said. “Most people will come when they say I can’t sleep anymore, I have to have a gallon of water by my bed and I can’t sleep.”

Part of the goal of the mobile clinics sponsored by the Medical Mission group is to do more screenings for diabetes along with taking care of other health issues they find.

Diabetes too often leads to death in Haiti, which is the poorest country in the Latin American and Caribbean region and among the poorest countries in the world. According to the World Bank, the average income per capita there is $1,149 U.S. dollars but others say it’s closer to $500 a year.

Mareus gives another example, this time of a nurse who is considered middle class, earning $200 a month. What if her child got diabetes?

In Haiti, it costs approximately $1 a day to be tested, plus two vials of insulin for treatment, which would add up to roughly $70 a month to treat that child with the type of generic insulin that’s been available for several decades. Now, without even buying any food or paying for housing or transportation, more than a third of her monthly income is gone.

“Dr. Manno will never turn anyone away,” said Joan Guite, who's been to Haiti maybe seven times over the past 10 years, starting after the 2010 earthquake. “So a lot of his patients can’t pay. This becomes a burden on him and paying his staff their monthly wage, so that’s why we put that in our budget.”

This Ministry in Medical Missions recruits local doctors, nurses and regular people to travel there (at their own cost of about $1,300) to help with mobile clinics. Non-medical volunteers are trained to register patients, pray with patients, or dispense drugs.

Krohn explains that they have a fund that focuses on the needs for the diabetic care, another that focuses on getting what the missionaries need to do the mobile clinics, and another — the agape fund — which helps cover any kind of medical care for those who can’t pay for it.

“‘Agape’ is the Greek word for unconditional love, as seen in the Bible,” Krohn said. 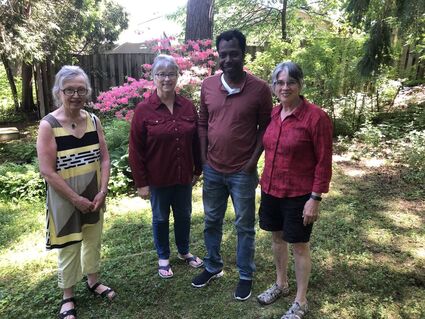 Mareus will visit more area churches this weekend, including Moose Lake Covenant Church at both the 8:30 and 10:15 a.m. services Sunday, and Barnum Methodist at 9:15 a.m. Sunday. He will speak to the Cloquet Rotary Club via Zoom on Tuesday, June 15.