Lands: Muse and music on the farm 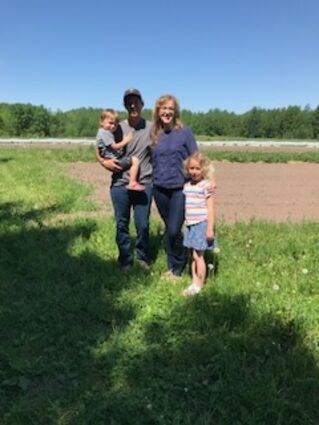 Some folks come to farming through family generations, finding themselves tilling the soil on acres cleared and planted by those whose DNA inhabits the cells in their bodies. Others arrive on the land through a much more circuitous route.

Adam Kemp of Uff-Da Organics is one of these people. He began his farming career 12 years ago when he was hired at Northern Harvest Farm and discovered an affinity for working the land and growing healthy food. A music composition major at the University of Minnesota Duluth, he says, “I wasn’t self-aware enough to know this was something I would enjoy. I just kind of fell into this as a summer job.” He has been farming ever since.

The desire to pursue a career in agriculture meant Kemp needed to find his own land. In 2013, he and his wife Jackie, the current program director at One Roof Community Housing in Duluth, had the opportunity to buy 40 acres across the road from Northern Harvest Farm.

“This is a great place to start a farm,” Adam said. “It’s good vegetable growing land, and markets are still developing around here.” The cleared portion of the property had not been tilled for decades, so Kemp has been building the soil and his homestead since acquiring the land. There are about three acres of fruit and vegetables.

In the beginning, Kemp had envisioned growing an abundance of fruit to add to the vegetable shares of Northern Harvest Farm. His plans have evolved as he faced the challenges of producing and picking the crops. He chose to focus on pick-your-own strawberries five years ago. To build his revenue throughout the growing season, he has added salad greens, spinach, and garlic (new this year) to the list of cash crops.

“The salad greens have taken off. I like to grow those things because they’re kind of finicky, and I like the challenge.” He sells the greens to grocery stores and hopes to sell to restaurants as the economy improves.

The reflection of Kemp’s upbeat attitude is apparent in his choice of the name for his farm. He had originally called it “Sugar Grange Organics,” but was notified by an agricultural society to “cease and desist” with the use of the word “grange” because it had a patent on it. Not wanting to become entangled in a legal matter, he changed the name.

“Friends joked about calling their farm ‘Uff-Da Organics,’ and they decided they didn’t want to. I decided for me it’s a fun way of saying we’re a local farm, and I like that it doesn’t take itself too seriously.”

Exhibiting enthusiasm and energy, Kemp speaks of his plans to expand the operation. He has planted oats to supply needed straw for mulching crops, but in the future he hopes to harvest the oats for milling. He is contemplating growing beans to dry and sell to local grocers. He still works part-time at Northern Harvest Farm and continues to seek avenues to complement the crops his neighbor grows.

Kemp loves what he does and will not hesitate to explain the methods he uses for weed control or share his plans for the future.

“I was studying music composition and playing a little bit of classical guitar for a program at UMD. It seems like a stretch when I try to explain it to people, but farming and music composition aren’t really that different. You’re sort of using similar muscles in terms of creative problem solving, put things together and make them work and function. I really love the problems that come up.”

One of the most distressing problems at present is the influx of the spotted wing drosophila fruit fly. It turns berries to mush by laying eggs on the fruit, making it unusable. Kemp hopes that by planting early-bearing strawberries and using other strategies he will be able to save the crop.

“I love the way it is right now. What’s been fun is just to watch the farm work its magic on people. If I’m not in the strawberry business in a couple years, it’s because of that one,” meaning the fruit fly.

The initial challenges of having a house built, growing successful crops, and getting sufficient infrastructure in place have been met. There is always more to do and new problems to solve.

“Making money is always a challenge,” he said. Nevertheless, it appears Kemp is ready to face the future with a song in his heart.

Pick your own strawberries available by appointment in season

Writer Francy Chammings is a retired English teacher and clinical psychologist who loves living in Carlton County. She is writing a series this summer highlighting some of the local farms in the area.