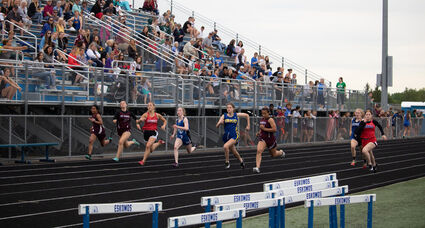 Racers in the girls 100-meter dash compete at the Section 7A subsection meet in Esko Thursday, including several from Carlton County.

The Esko boys and girls track teams swept last Thursday's Section 7A South Subsection meet at home, with the girls winning by 54.5 points over second-place Proctor and the boys team beating Proctor by 43.5 points.

The subsection meet was the first giant step toward a trip to state. It advanced Esko and other top track and field athletes from the subsection meet to the Section 7A section meet in Cloquet on Thursday, June 10, after this issue of the Pine Knot went to press.

While there will be lots of Esko blue and gold at Cloquet, Bromberg Field will be a rainbow of colors Thursday, with representatives from the section's 27 teams competing in the section championship meet. The top seven individuals in each and top four relays advanced.

Some of the top performers countywide at last week's subsection meet in Esko included Kaden Robbins of Moose Lake, who won both the boys 100- and 200-meter dashes, and Noah Foster of Cromwell-Wright with a first in the 3200-meter run. Esko senior Dylan Edland placed first in both the 110- and 300-meter hurdles, while his classmate Gage Stankiewicz - one of the top throwers in the state - took first in discus and second in shot put, trading places with Barnum's Garrett Coughlin in the two events. Colin Emerson of Carlton took third in both throwing events. Moose Lake relay teams dominated last week, taking three firsts and a second place, while Esko teams took second in the 4x100 and third in the 4x400 and 4x800. 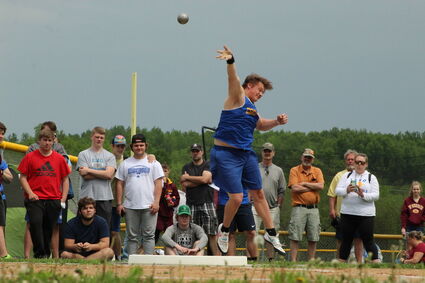 Esko senior Gage Stankiewicz draws a crowd as he hurls the shot put Thursday during the Section 7A South Subsection meet. After making at least two practice throws of 50 feet or more, Stankiewicz placed second with a top throw of 43 feet, 4 inches. He won the discus with a toss of 158 feet, 7 inches.

On the girls side, Esko's Emily Rengo took first in the 100-meter dash, followed by Barnum's Reese Miletech. In the 200, Esko runners Kaitlyn McConnell finished first, and Whitney Hason third. Cromwell-Wright's Emaleigh Olesiak took second in the 8000 meter, and first in the 3200. In the hurdles, Esko's Gwendolyn Lilly won the 100-meter hurdles, and placed third in the 300, behind Skyla Thompson of Moose Lake in first place. Esko took first in the 4x100 and 4x200 relays, while Barnum placed third. In the 4x400 Esko took second and Moose Lake fourth, and Moose Lake took second and Esko fourth in the 4x800 relay. In the high jump, Esko's Allison Thornton took first with teammate Liberty Clifford in third, while Barnum's Brooke Doran took first in long jump, with Esko's Rengo in third. Moose Lake's Skyla Thompson placed first in pole vault, with Esko's Lilly in third. Esko's Zoie Johnson placed first in both discus and shot put Thursday.

The Esko coaches were very optimistic about the section meet.

On the girls side, Peterson said the group is extremely balanced, with athletes in every event that can compete. "But most importantly, our girls have come together this spring; we've come from a group of good athletes and became a team of support that prides themselves on getting better everyday," Peterson said.

"Our boys are gritty, they are competitive while still being young," he added. "The seniors are the leaders and have done a good job steering the ship and encouraging the younger athletes to become workers."

Out of approximately 70 athletes in all, Peterson said Esko had 49 qualifying entries to the section meet Thursday. Look for a story on that meet in next week's Pine Knot News.