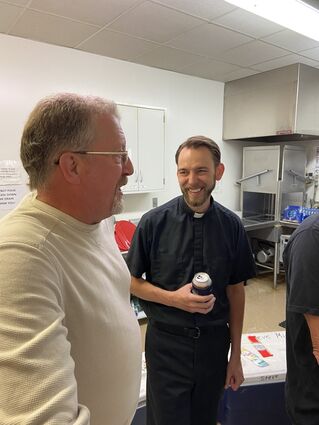 Father Justin Fish chats with a Queen of Peace parishioner during his farewell picnic Sunday.

After serving as pastor for the Queen of Peace Catholic Church for the past 10 years, Father Justin Fish celebrated his last mass here Sunday, June 20. He likes to joke that he's spent a quarter of his time on Earth here.

Fish will be the new pastor at St. Joseph's Church in Gilbert, and Resurrection Parish in Eveleth. It is common within the Catholic diocese to reassign priests after they have served in a parish for 10 years or so, although the decision is up to the Bishop, according to a Diocese of Duluth spokesperson.

"I think of pastoring as being a shepherd," he said. "The shepherd doesn't put a leash on the sheep and drag them where he wants to go. But the shepherd and the sheep trust one another and work together. It isn't any gift or talent that I have but, like I said, it's been a good fit. I hope the same will be true at my next assignment."

Fish's time in Cloquet was productive, he told the Pine Knot News. The parish completed a number of building projects, including a new roof for the nearly 100-year-old church along with brickwork on the building's exterior. The school graduated its first eighth-grader since 1969. "Of course, celebrating baptisms, weddings and other milestone events with families is a highlight," he added.

There were challenging moments as well.

"Losing parishioners, especially when they are young, is never easy. But I have seen our community rally together in those moments. The center of our faith is our relationship with Jesus Christ and He is there in the happy times and the sad times. Our community reflects that relationship," Fish said.

Fish shared some stories of his time in Cloquet that were not necessarily related to his ministry. One of his favorites is the time a bat flew into the sanctuary and landed on the wall while he was giving a homily. "I was holding a paperback book in my hand, so I went up to it and smacked it with the book and then carried it outside. I often get asked to tell the story of 'the time you killed the bat during Mass,'" he said.

Another story revolves around the Fourth of July.

"A few parishioners and I climbed up the church bell tower to watch the fireworks. It didn't take long before three squad cars showed up wondering what we were doing up there. I'm glad someone in the neighborhood was looking out for the church," he said, adding that the police may have also been interested in fireworks that may or may not have been set off from the bell tower.

Fish estimated he has said close to 3,500 masses in his time here. It's hard to leave after 10 years in the parish, he said, but he's also excited about the new challenges that lie ahead. And just because he's leaving doesn't mean the relationships he's made here are over, he stressed.

"People tell me they are sad to see me go, which isn't easy, but I suppose it's better than being glad I am gone," he said. "I will always have fond memories of my time at Queen of Peace and Holy Family. I'm grateful for all the kindness that this community has shown me over the past 10 years. It's been a good run and we can thank God for that."