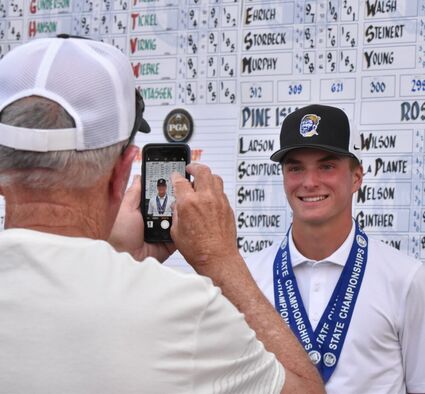 Sam Baker poses for his proud grandpa Bob Baker after he and the Cloquet team won the Class AA state championship .

Just last month, Sam Baker was leading his Cloquet High School boys golf team to a state title, with the team winning the Class AA title and Baker taking first individually. Now the recent CHS graduate can add another feather to his hat after qualifying to play in the U.S. Junior Amateur Championship.

"It has been a pretty exciting time, to say the least," Baker said. "I've been golfing a lot, so right now I am playing some pretty good golf."

That may be the understatement of the year, as Baker was one of 85 golfers at the qualifier in Maple Plain, Minnesota on June 30 and shot a 4-under par 68. In most years, that score would have been good enough to win the event. This year, three golfers shot 67 and the winner shot a 65 - putting Baker in the fifth and final qualifying position.

"Only the top five go to the tournament, so I managed to get in," Baker said. "I was actually leading the tournament much of the day because I was one of the first golfers out, but it was just a good day to shoot a low score and I was still able to make the tournament."

The 2021 U.S. Junior Amateur Championship will take place July 19-24 at the Country Club of North Carolina, in Pinehurst.

Baker said he feels pretty good about his game right now. "My striking isn't perfect, but I am putting well and I am managing the game well. I am not making a lot of mistakes. I am putting it in play and hitting lots of greens."

The previous week Baker played three tournaments in five days and rolled into the qualifier playing well, but nothing Baker has played in will match the U.S. Junior Amateur Championship.

"It is the biggest junior tournament in the world," Baker said. "It will be top-notch competition with the best of the best playing in the tournament, so it will be fun to see how I stack up against them.

"There will be 264 golfers there," said Baker. "I am excited to try and get to match play because I love that style of golf because it allows you to go at some pins and make some birdies."

While Baker is enjoying his accomplishments, he also realizes there is still more work to do.

"It feels nice to know that all the hours of work I have put in is allowing me to have some success," Baker said. "I am anxious to see what I can do in the tournament."

Baker will depart for North Carolina July 16 or 17.

"The plan is to get there a couple of days early," Baker said. "I will get in a couple of practice rounds, and then it's go time!"