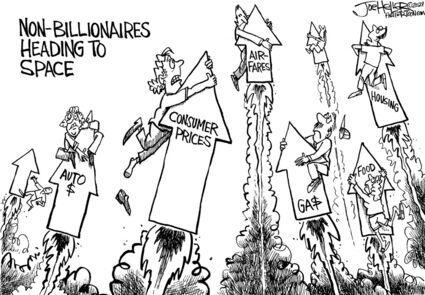 I love newspapers, and always have. It's common for me to pick up a copy of the local paper at every little town I may be traveling through, and it's fascinating to learn that every town has its issues - there's often a story about a local tax increase or public construction project, and there's always coverage of local government meetings. You can figure out who are the local sports heroes of the day, and it seems people are getting married all the time. Even the obituaries provide a nice recognition of the locals and the lives they've led. You can learn a lot by reading the local newspaper.

Sometimes I feel the need to point out that local newspapers are the backbone of every community fortunate enough to have one, and we need to make sure they can remain viable. The Pine Knot News is no exception. While there is little danger of us going away, we can learn from other communities to keep our paper viable.

I was sad to learn that the International Falls Journal ceased publication after 111 years. We've seen that in our area, too: The Lake County News-Chronicle in Two Harbors went out of business a few years ago after 129 years. I worked at the Chronicle back in junior high - it was my first paying job (for bussing tables at my dad's restaurant, I was paid in room and board). My job was to pick up all the little waxed paper cutouts from the mockup, which was how they put together papers back then. The little scraps stuck to all the surfaces - tables, floors, chairs - everything, and I had to get them picked up. By the time I was done, the papers would have arrived back from the printers in Carlton, and I'd help sort the addressed copies for mailing. I was 13 and loved it. But there's no newspaper in Two Harbors anymore.

It may take years to realize the blow to a community when it loses its newspaper, but it will not be good.

This is what happens when newspapers are controlled by media companies who regard newspapers as advertising mediums rather than journalism. Certainly, ads are necessary to support a local paper. But that's not its primary purpose. Newspapers like ours are the only service that reports the workings of our local governments and events in a way that keeps pressure on them to conduct their activities in an open, transparent, and honest fashion.

I don't know of any website that puts much of their resources into uncovering local dishonesty, scandal, and immorality in government and business, and we can't rely on TV stations to do it, either. Fortunately, our local governments and businesses are relatively clean and aboveboard. But take away the watchdog that is the local newspaper, and it won't take long for the bad guys to notice that no one's watching them. And that's not good.

Local newspapers uncovered the Watergate scandal. They've helped put politicians and crooks behind bars. They fact-check claims by our leaders. They are required by journalistic integrity to verify information before printing it, and if they make a mistake, newspapers print retractions and corrections. It's rare when other mediums admit and correct their mistakes. But that's why we know we can trust local newspapers. The Founding Fathers felt their need was so great, they made the First Amendment to our Constitution to protect them. That need is still great. Left to itself, weeds will grow on soil that's not tilled. In a way, it's newspapers that keep the soil of local government tilled. Sounds pompous, I know, but it's true.

I learned a long time ago that businesses who don't recognize that the world has changed and fail to adapt often lose out, and that may be happening to newspapers. It's not simply a matter of changing mediums from newsprint to electronic screens, either. It's not the newsprint that we are selling, it's information - credible and responsible journalistic information. I think holding an actual newspaper is the most enjoyable way to read, but others who use the computer, tablet or phone are getting the same information. And it's just as valuable.

As time goes on, we'd be fools to not notice change as it's happening and adapt. You may not recognize our traditional newspaper in the next decade. Who knows how we'll be delivering the news in the future? But we know that the Pine Knot News is here to stay. And we're excited at the challenge.