Holding on despite dairy trends

Small farm is busy - and a rarity 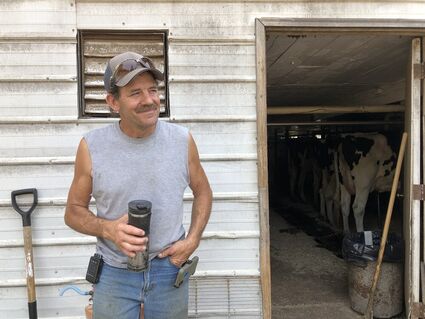 Peter Laveau is part of a "dying breed" of small dairy farms in the state. His family operation keeps everyone busy while fluctuating milk prices keep them on their toes. Despite the endless list of work to be done on such a farm, Laveau says farm life is worth it.

"I am one of a dying breed," said Peter Laveau during a recent interview at his farm. He is referring to his occupation as an independent family dairy farmer. In 1990, the state numbered just under 10,000 dairy farms. By the end of 2020, the total was down to 2,334, according to the Minnesota Department of Agriculture. Farms have become larger and produce more with volume working for them. The small-farm operations have lost out.

To be a dairy farmer requires dedication and determination. It's definitely not the correct fit for anyone who wants a 40-hour work week, fringe benefits and a solid retirement plan.

"I grew up on the farm, that's my mom and dad's," Laveau said as he described how his parents moved to the farm outside Wrenshall in 1957. His dad passed away when he was in his early 20s, so he stepped in to help his mom run the farm and has done so ever since. His wife and daughter help out.

"My 10-year-old grandson did all the raking last year. Did better than the teenagers," Laveau said.

With a matter-of-fact delivery, Laveau describes his typical day. "I get up at 4:30. Right now the cows go out at night. I put the dry hay and grain down, bring them in. My wife, my daughter come out to help."

They currently milk 90 to 100 cows, but counting young stock and dry cows, his herd numbers between 220 and 240. Milking and feeding along with other chores takes about 3½ hours. The cows need to be checked around noon to be sure all is well and to "sweep up" as needed.

"Four o'clock milk and feed again," Laveau said. But that is not the end of the day. After chores there is field work, feed mixing or equipment repair to be done. "Usually I call it a night around 10:30," he said.

Laveau has a long list of tasks. One is mixing the special feed for the cows. They are given a "total mixed ration" of feed. "That has everything: haylage, corn silage, feed, protein. We have a big wagon. Just mix it in there and feed it with carts in the barn."

The hay and corn are grown and harvested by Laveau either on his farm or land he rents. Much of his spring, summer and fall are spent in the fields.

There are no local creameries to handle Laveau's milk, so he has a contract with First District Association, a cooperative milk processor in Litchfield in central Minnesota. It picks up the milk every other day.

The biggest challenge for him, Laveau said, is the "rollercoaster" of milk prices. "When we ship our milk we don't know what we're getting paid," he said. First District sends a payment the next month, but there is no set price.

In spite of the challenges of milk prices and unpredictable weather, Laveau easily enumerates the good things about farming: "Raising a family, watching the crops grow. I have a couple grandkids in the house right now," he said.

A walk through the barn reveals Laveau's fondness for his cows. He pets the calves as they approach the side of the pen, gently pushes a cow to a safer position in her stall and nudges another that is reaching for a water pipe. The barn is cool and clean with several huge fans moving the air and keeping the cows comfortable.

There are also pigs and chickens on the farm. Laveau sells fresh eggs year-round to those who want to stop by and pick them up: $3 a dozen. He works for a meat processor one day a week in the winter. He wears a pager on his waist because he's also a member of the Wrenshall volunteer fire department. 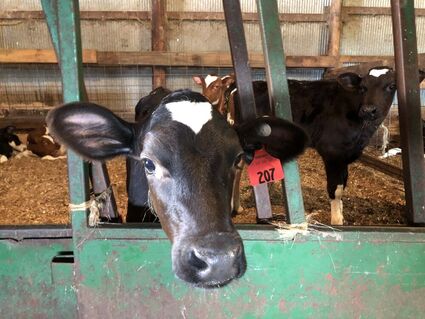 A calf pokes its head out at the Laveau dairy farm in Wrenshall.

"I have been the fire chief for 35 years," Laveau said. His life revolves around family, farm and community.

A sense of pride in the farm is evident from the multitude of flowers growing in the front yard to many more blooming around the "Laveau Dairy" sign painted on the side of the barn. The corn grows tall in the field next to the house and the oats are making heads across the road. Laveau's words hang in the air: "Raising a family, watching the crops grow" - the reasons he likes farming.

Writer Francy Chammings is a retired English teacher and clinical psychologist who loves living in Carlton County. She is writing a series this summer highlighting some of the local farms in the area. Contact her at [email protected]