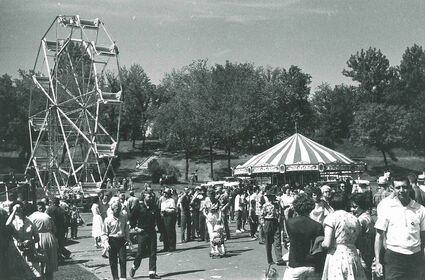 Florida resident Kathy Peil shared this memory of the Fourth of July when she was growing up in Cloquet in the mid-1950s, when the fireworks were set off just south of the ballfield in Pinehurst Park. According to Jim Boyd, who forwarded Peil's remembrance, in those days, firework lighters had a flare that glowed in the dark like the ones they used on the railroads to direct trains. The fellows lighting the fireworks would walk up to the structure the fireworks were placed in and light them with the flare. "The flare was a reddish glow so you could see the guys working," Boyd said.

To submit your own Cloquet memory, photograph or story, please email [email protected]

The best part of summer when I was a kid was the Fourth of July.

Pinehurst Park in Cloquet began setting up a few days before, and if we happened to drive by then, the anticipation was absolutely painful. Then the day would finally arrive. First there was the parade. We would head downtown in the morning and find our favorite spot to watch the beautiful floats, marching bands, clown cars, political hopefuls, and more.

Yes, although I enjoyed it, my mind was definitely on what came after the parade. Finally the horses would show up at the end of the parade - and we could head to Pinehurst Park where the carnival would open and thousands of people, it seemed, would all appear almost instantly, bustling their way to the games, rides and food stands. The area wasn't grassy as it is now, but entirely paved with black asphalt. The many rides and games were spaced close together and the music and excitement filled the air.

Many times my mother would be working at the Holy Family Church bingo stand while we kids got to ride and play games to our hearts' content, or at least as long as our money lasted. We probably got to spend a couple dollars that day, a real splurge for the times. Rides like the Tilt-a-Whirl, ferris wheel, octopus, bullet and more were 10 or 15 cents. Games were a dime and you won real prizes, that is, if you could win.

In late afternoon, we usually went home for supper, maybe a picnic with family. The real thrill was yet to come: the fireworks. Hundreds of people came to the park at dusk and set up their chairs and blankets to watch the fireworks.

We always sat on the big hill on the west side of the park, where we could see the carnival lights and hear the music of the merry-go-round. We had to get there early to find a spot. Everybody went - parents, grandparents, aunts, uncles, cousins, neighbors, relatives visiting from various places - it was real family and friends time. We'd "ooh" and "ahh" at the noisy, colorful explosions for about an hour, then happily and sleepily head home.

It was a time of togetherness and connection to the community. The sights, sounds, and smells are forever etched in my mind.