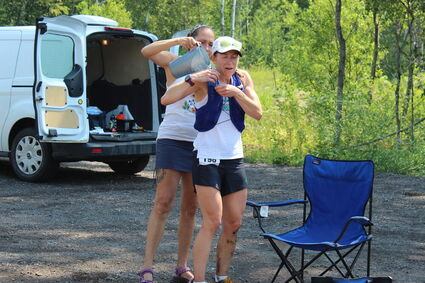 While the thunderstorms stopped in time for the 6 a.m. start, by noon runners were faced with sun, searing heat and stifling humidity, making finishing the race a real challenge. Held every year during the Carlton Daze celebration, race officials say they've seen incredible weather extremes dating back to its inception in 1982.

At noon, while applying sunscreen to Voyageur veteran Jake Hegge's sunburned shoulders, race medic Lisa Byrne said she hadn't had any calls yet. "Things are good now but I'm expecting it to get a little rougher with the heat and humidity. In general, people take good care of themselves."

The winners of the race ran more of the 50 miles in better conditions, courtesy of their faster pace. Benjamin Drexler, a 33-year-old teacher from Minneapolis, won the men's race in a time of 7:09.34. Buhl's Gretchen Metsa, age 37 and a type 1 diabetic, won the women's race in 8:07.06.

The Voyageur is an out-and-back course starting at Carlton High School, passing through scenic Jay Cooke State Park en route to Duluth's Lake Superior Zoo where it turns around, and finishes at the high school. Even with fewer runners participating this year - there were 142 starters - only 111 (78 percent) of runners finished all 50 miles, the others either dropping out or being "time barred" if they were moving too slowly to make the finish in Carlton by the 8 p.m. cutoff.

"I've run a lot of marathons and these were the toughest conditions I've ever run in," said local attorney and running enthusiast Bill Helwig. "Trying to stay cool and hydrated was nearly impossible."

The 64-year-old runner has an impressive racing pedigree. He has run 60 marathons in his career, including 20 Grandma's Marathons and 20 Twin Cities Marathons, as well as numerous ultramarathons.

"I was a road marathoner for years, but got interested in trail running through my son-in-law," Helwig said. "It is a totally different style of running and you really have to train for running on trails in order to understand the difference and how important it is to keep your eyes on the ground so you don't trip and fall."

It was his third Voyageur and the first he didn't finish. "The course is extremely demanding and running in Jay Cooke is rugged and beautiful all at the same time," Helwig said. "I have run longer races, I've run more technically difficult courses, but this is the worst I've ever felt in a race."

The tough conditions made many of the 142 runners take extreme measures to keep cool.

"On the return leg I even stopped and laid down in Kingsbury creek for five minutes and again in Mission creek which is 2 miles past Becks Road," said Helwig. "That helped me keep going, but my pace got so slow that I didn't make the cutoff at Peterson's aid station."

Helwig was 41 miles into the race when he was told his race was over due to time constraints.

Race volunteers gave him a ride to the finish from there.

"I don't think I've ever run in a race that hot and humid for close to that kind of distance," Helwig said. "It was so draining and I was getting extremely nauseous."

Helwig and his wife have 11 grandchildren. According to him, his family thinks Grandpa has to be a little bit off-center to do what he does. "They probably think I'm crazy," Helwig said, laughing.

"I spent the middle of the race from Becks Road to the zoo and back to Becks running with Glen Hill, a 20-time finisher of the Voyageur," said Helwig. "He was going to finish his 21st Voyageur at 72 years of age. I wasn't feeling that great by then but I figured if Glen could do it then I would run it with him. However, on the return from the zoo, Glen started to lose the battle with the heat and decided he needed to drop out at Becks Road. We caught up with another runner friend of his who said he would stay with Glen, so I took off a couple miles out, to try and finish for the both of us, but I didn't make it either."

Doug Kleemeier was the oldest finisher in the top 10. The 55-year-old from Roseville, Minnesota said he loves the Voyageur race. "It always reminds me to be humble," he said, as volunteers poured ice water over his head at the Becks Road stop, when he had 16 miles left to run.

Many runners and volunteers said it's their favorite race.

Wendi Baldwin came up from the Twin Cities to volunteer, again. She loves how the race director is "so inclusive and welcoming," and said most of the runners and volunteers know and take care of each other.

Esko's Mary Binsfield couldn't run because she's still recovering from hamstring surgery two years ago, but she volunteered Saturday to help make sure runners got across Becks Road safely. She knew many of the people she was helping. "That's Jeff Goldstein," she said, pointing at an older runner. "He's one of the OG (original gangster) guys." 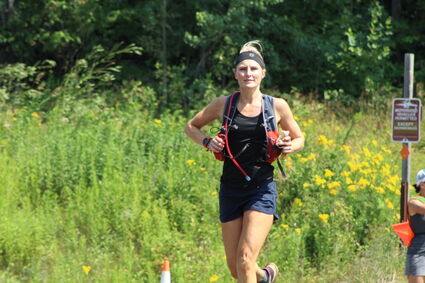 Women's first-place winner Gretchen Metsa smiles as she enters the Becks aid station for water and a very short rest Saturday, with 16 miles to go. An elite ultramarathon runner and type 1 diabetic, Metsa runs with a continuous glucose monitor on her arm that sounds an alarm when her levels get low.

In all, 77 men and 34 women finished the race. Included in the finishers were at least three Carlton County runners. Esko's Ryan Zimny finished the race in 10:49:15, good enough for 38th place overall. Todd True, also of Esko, took 78th place in a time of 12:20:04. Finishing in 12:27:06, Cloquet's Nicole Diver took 87th place overall and 26th place among women runners Saturday.

Despite the tough conditions, Helwig was surprisingly in good shape the day after the race when interviewed by the Pine Knot News.

"I actually feel pretty good," he said Sunday afternoon. "I could only drink ice water by the time I stopped and I wasn't able to eat anything after the race until 5 a.m. Sunday morning when I woke up and was so hungry I couldn't sleep anymore. After eating a batch of scrambled eggs I slept until almost noon and then got up and ate some more. I'm feeling better, but that is about the worst I have ever felt after a run."

Despite the tough run, that won't stop Helwig from doing it again next year.

"I love running, so I am sure next year it will be more of the same," Helwig said.