It's hall of fame success for Esko softball legend 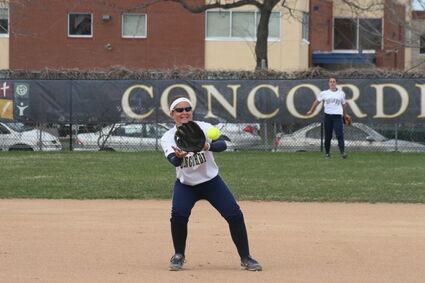 Esko grad Sami Mattson was recently inducted into the Concordia-St. Paul Athletic Hall of Fame. Here, Mattson fields a ball in 2011, during her senior year at Concordia University in St. Paul.

It was a chilly day in March when former Esko High School athlete Sami Mattson's cell phone buzzed. The call was from Bob Bartell, her former college softball coach at Concordia University in St. Paul. Bartell was nominating her for induction into the Concordia-St. Paul Athletic Hall of Fame.

"I am not sure what my initial facial expression was," said Mattson. "I just know I was a little shocked, with how many great softball players have played at CSP."

That shock turned to reality in April when Mattson was told she had been elected to the Hall of Fame by Concordia's president.

"I initially missed the call and when I listened to the voicemail it made my mind go a million miles an hour since he only mentioned he was calling to give me some special news," Mattson said.

After some phone tag, Mattson got the news. "The first people I had to tell the news to were my parents. They were my biggest supporters growing up. There were not many games that they missed. I would not be where I am today if I did not have them as a support system."

Amazingly, Concordia-St. Paul was not her first choice; Mattson had verbally committed to play basketball and softball at Jamestown College in North Dakota before having a change of heart. Mattson committed to Concordia just days before the start of school.

"My high school coach Brad Emanuel called the coach at Concordia to let him know that I was not going to Jamestown anymore," said Mattson. "I received the call from CSP, and went down to St. Paul for a visit with Brad and Erin Emanuel, and I really liked the atmosphere. Coach Bob Bartell was so welcoming, along with the others that I met. It just felt right, and 11 days before the start of my freshman year I committed to play for the Golden Bears."

Mattson is a 2007 graduate of Esko and joined a Concordia-St. Paul team that already had a string of local ties dating back to former Cloquet Lumberjack Liz "Bug" Plante, who started in the infield for the Golden Bears 2001 through 2005. When Mattson joined the team, she joined former Hermantown star Anna Bjorlin and Cloquet star Tiffani Rodd, who had both arrived the year before.

"Due to committing so late to play at Concordia, I was a little worried about how I would get along with the other players because I had never visited or met anyone from the team," Mattson said. "The transition was made a little easier due to having two players on the team that I grew up playing against and with."

Mattson's statistics at Concordia are so impressive they are nearly impossible to believe. Mattson is first on the all-time home run list with 36, and first in single-season home runs with 19. In 2011, she set the school single-season record for slugging percentage at an incredible .763. She also holds the second-best career slugging percentage, has the second-best single season runs batted in record, and ranks third in career assists and third for career total bases. To top it off, Mattson also has the fifth-most double plays turned and is fifth in career runs batted in.

Mattson, a shortstop, and Bjorlin-Graves, a second baseman, formed an impressive double play duo for three years until Bjorlin-Graves graduated in 2010. (Bjorlin was inducted into the CSP HOF in 2020.)

Growing up in Esko, Mattson played her summer ball under the watchful eye of longtime coach Jerry Moran. In her high school years, she played for one of the top coaches in Minnesota - Brad Emanuel.

As a senior in high school, Mattson led Esko to the state softball tournament with a thrilling win over a powerful Eveleth-Gilbert team.

"Sami was a special player. I enjoyed coaching her because she was advanced and I could teach next-level skills," Emanuel said. "Sami also played on some good teams where she made her teammates better and vice versa. I have a few players that I let them do their thing and had to pull back the reins back at certain times in games. Sami was that good and was one of those players." 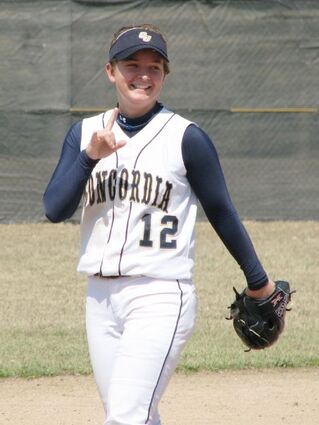 Sami Mattson graduated from Concordia in 2011 and was a softball coach at Esko, her alma mater, last year.

At CSP, Mattson was a four-year starter at shortstop. Her team compiled an impressive 127-83 record and earned a trip to the NCAA Tournament in 2010. She played in 204 of a possible 210 games in her career. In her senior season, she led the conference in home runs and was named All-Region as well as being invited to play with the U.S. Athletes International team for the Aruba Friendship series.

Mattson currently resides in Esko, where she was an assistant coach with the Esko High School softball team last season. She is currently planning a move to the Chicago area for a job in the business field.