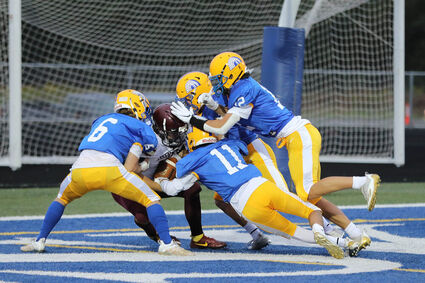 The Esko football team rolled to an impressive 37- 0 win over Duluth Denfeld Sept. 2 to open the season.

The Eskomos put up impressive offensive and defensive numbers. "I still think we made too many mistakes," said Esko coach Scott Arntson. "We had three turnovers and six penalties and we need to clean that up if we want to beat the better teams, or they will take advantage of that."

Last season the Eskomos had 70 players in grades 9-12, but this year have 54 after graduating a large senior class. Despite lower numbers, the Eskomos have some impressive athletes who will be a cause of consternation for most every team they play.

"We have some good speed and we have some pretty good athletes," Arntson said.

Those athletes showed up quite often on the stat sheet on Thursday. First it was junior running back Nolan Witt scoring on a 44- yard touchdown romp in the first quarter to make it 7-0 after Wyatt Stankiewicz kicked the extra point.

"Nolan had a great night for us and was the hammer in our option offense," Arntson said. "He got into the weight room and got stronger and faster, and it shows."

The Eskomos added another couple of points when they picked up a safety courtesy of a big play by Kade Gonsorowski, making it 9-0 after one quarter.

"Our quarterback has a tough job in our offense," Arntson said. "He has a lot of checks at the line and needs to be patient and learn to take what the defense gives him. He did a good job of that on Thursday night."

Leading 16-0 entering the second half, the Eskomos opened things up in the third quarter when Koi Perich returned the opening kickoff 70 yards for a touchdown and a 23- 0 lead.

"Wyatt (Stankiewicz) did a nice job on extra- point kicks for us and had five of them for us," Arntson said.

Joey Antonutti got into the act a few minutes later when he found Mason Perich open for a 10-yard scoring pass and Christensen ended the scoring when he scored on a 13- yard touchdown scamper. 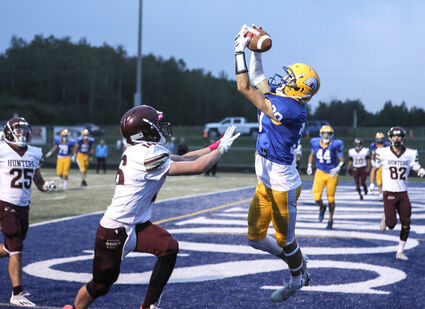 While the offense racked up nearly 300 yards, the Eskomo defense was perhaps even more impressive as they held the Hunters off the scoreboard. Koi Perich led the effort with six tackles while Antonutti, Carter Zezulka, Brett Lillo and Dan DeMuth all finished with four tackles.

"I was impressed with our defense and the way they swarmed to the ball," Arntson said. "I thought up front that Rusty Anderson really had a good game. He handled double teams all night long, which allowed our linebackers to be freed up to run to the ball."

The opening night win was important to setting the stage for the rest of the season, Arntson said.

"It's good for confidence and gives the team high hopes. You always have expectations, but until the lights come on and you play you just never know how guys will react. Our goal is to get better in every half we play and every game we play."

On Friday the Eskomos will travel to Mora.