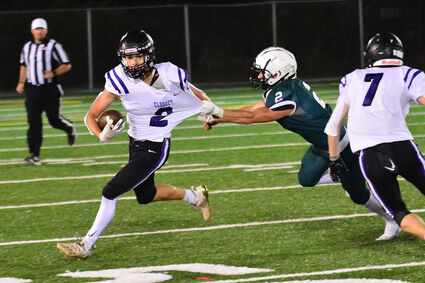 Cloquet's Alexander Petersen slips the grip of Proctor's Carter St. Germaine on a run play as the Lumberjacks and the Rails meet for the season opener in Proctor Friday night.

The Cloquet football team opened the season on the road at Proctor on Friday night and executed a game plan nearly to perfection in picking up a 38-6 win.

After stopping the Rails on their opening drive of the game, the Lumberjacks went the length of the field and scored with 5:56 remaining in the first quarter on a 1-yard run by quarterback Alec Turnbull. The extra point was booted by Dain Painovich as Cloquet went up 7-0.

"We did some nice things and I thought the effort was good all the way around," said Cloquet coach Tom Lenarz. "We did some great things on both sides of the ball, but there are things to clean up, and after looking at the film the guys are excited about getting better."

Proctor tried to catch Cloquet off guard on its next drive by going for it on a fourth down. Cloquet made the stop, took over on downs, and eventually scored when fullback Marshall Hayes rammed in from the 4-yard line. It was 14-0 with 1:39 left in the first quarter.

"We have some really good team speed, and that can be tough for other teams to handle," Lenarz said. "We also have some pretty good guys up front who can be tough to deal with on both the offensive and defensive line."

"That was set up by Alec and Reese talking about it," Lenarz said. "We had run the same play a few times to the other side of the field and they noticed the defensive back was cheating on the backside, so they made the adjustment and made a nice play."

Will Turnbull added to the scoring barrage in the second quarter when the burly senior picked up a fumble and rumbled 86 yards, leading to 28-0

In the third quarter, Alec Turnbull found Hayes from 15 yards out to make it 35-0.

Painovich added a 26-yard field goal late in the third quarter to push the lead to 38-0 as he concluded an impressive kicking night for the 'Jacks.

"He is kicking well, and we are pretty happy with him," Lenarz said.

Proctor added a late score to make the final 38-6.

The coaching staff was happy with the big guys in the trenches who continually manhandled the Rails. 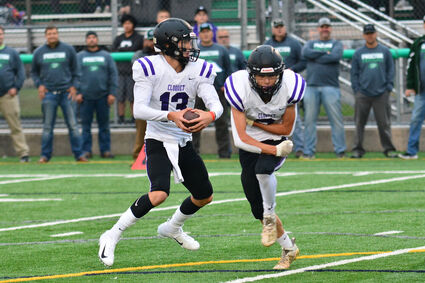 "We really controlled the line outside of three or four plays," Lenarz said. "I feel good about where our line play is at and I like the effort and the intensity. Reese Turnbull is kind of the guy I see as our leader of the offensive line because he has a lot of intensity and is high-energy, and he's always looking to get better."

Cloquet rolled up impressive numbers on the way to their win with 195 yards of rushing offense to go along with another 171 yards in passing. In all, the 'Jacks put up a gaudy 366 yards of total offense while holding the Rails to 146 total yards.

"It's always nice to get that first win," Lenarz said. "There's a lot of things we need to clean up, but we'll get there."

The Lumberjacks will be at Duluth Public Schools Stadium Friday night to take on Denfeld.