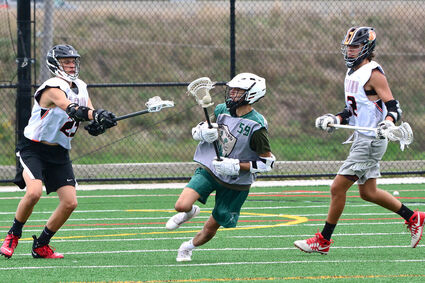 Northern Siege player Sam Ojibway, a sophomore at Carlton High School, cuts between two St. Cloud defenders as he takes the ball to the net during a Sunday double-header in Maple Grove last month.

Teenage lacrosse players in Carlton County are getting a chance to play this fall after the Covid-19 pandemic shut down not only the burgeoning youth league but also any headway in the game taking hold at area high schools.

County athletes have been able to play lacrosse in youth leagues since 2013, ultimately in the local Northern Siege league that began in 2018. As the number of players ages 5 to 14 increased, organizers began asking school districts to consider a lacrosse option at high schools. Players needed a league to play in after reaching the cutoff age for the youth league, said Jen Saletel, vice president of the Northern Siege group.

"Long-time boys players and girls players approached a pivotal point," she said. Unless Carlton County schools joined others in the region - Duluth, Hermantown, Proctor, Grand Rapids, Superior - "they would have nowhere to continue to play the sport they love."

The problem remains after districts said "no" to the idea of adding lacrosse. After a frustrating effort in 2019, Saletel said, the mantra was "we will be back next year." Then the pandemic hit, shutting down the youth league and further stalling the effort for high school options.

Saletel said she found a light at the end of a dark tunnel in Homegrown Lacrosse, a fall league for high school players. It agreed to take on a Northern Siege team if enough "aged out" players signed up. Saletel was happy to see 19 do so, meaning the county could field a team to play Sundays at Twin Cities area venues this fall.

A coach was hired - Ryan Pamperin, a University of Minnesota Duluth player - and practices began in late summer. The team had its first set of games on Sept. 12. The short season will be capped on Oct. 16-17 with the Great Pumpkin Shootout in Farmington.

Saletel said it's been a big commitment for players and their families to travel every weekend. Players have also juggled work and other sports into their routines. It shows how dedicated the players are, she said.

The Northern Siege league was able to continue this past spring and plans to do so again. Saletel said there are also plans to offer ninth- and 10th-grade boys games through the Homegrown league this spring.

For more on the Northern Siege Youth Lacrosse group, visit its Facebook page or tshq.bluesombrero.com/northernsiege