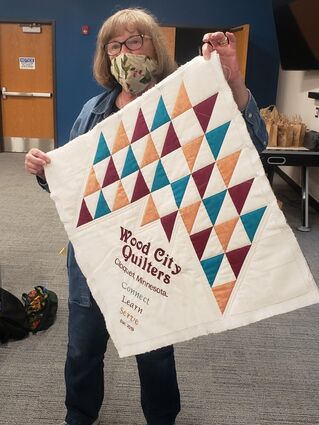 Wood City Quilters treasurer Deb Marshall displays the group's logo quilt block. The group meets the second Wednesday of every month at 6 p.m. at the Cloquet Library. For more information, email [email protected] or find them on Facebook.

Some of us may remember learning about the pioneer days when the women settlers would gather every so often for a quilting bee, a day of camaraderie and sewing.

Even though our 21st-century lifestyle is far removed from those early days, the essence of the quilting spirit is alive and well in the members of the Wood City Quilters.

The group formed in April 2019 with about 15 members. They originally met in the Esko Town Hall, but now meet on the second Wednesday each month in the Cloquet Public Library's large meeting room, as their group has grown to more than 40 members. Robin Mullenix, the first secretary, said they voted to call their guild the Wood City Quilters. Deb Marshall, the group's treasurer, designed the logo for the guild's signature quilt block. In keeping with the theme of Wood City, she created a “tree of life” pattern.

Secretary Kris Keppers said it took some time to establish their guidelines and objectives. Some of the founding members had belonged to other guilds, so this group had some models to follow. However, they went further to build their own identity.

“When you're setting up a group originally, it's a lot of really long meetings about a lot of stuff. As we grew our membership, we kind of found our focus, so it took a little while.” Keppers said.

President Cathy Nelson added, “We've just established in the last year what we're really about. Everyone who joins has a different reason for joining.”

She said some people are more interested in service projects and others want to learn more about quilting. With all of the organizational work completed, they were able to add speakers or other programs to their meetings.

“We worked really hard at having people come in and learning from those outside of our guild,” Keppers said.

What they are really “about” is included on their handout bookmark. This handy piece of paper lists the guild's mission statement: to connect with other quilters; to learn from demonstrations, speakers or each other; to serve the community with charitable donations.

Some of the donations listed include fleece hats and mittens, walker bags and, of course, quilts.

“A lot of people wanted to do community service, so that was a big piece of helping us have an identity, so that would be value added for people to want to come,” Nelson said.

The commitment to connect was evident throughout the pandemic. Keppers said, “We're one of the only guilds that were meeting personally, and it's thanks to the library here.” Since the library has “this big beautiful room,” Keppers said, they could comply with Covid guidelines during their meetings. There were times when a scheduled speaker canceled. However, with the help of library staff and the media in the room, quilting programs and demonstrations on YouTube were accessed for additional instruction.

One of the service projects the quilters completed was a large quilt that was entered at the Carlton County fair. Members had been given a piece of focus fabric that was incorporated into a 10 inch block of the quilters' own fabric and design. The quilt won a blue ribbon. Keppers said, “We hope to raffle it off at some point this fall to raise funds for teachers to buy things that are a little more pricey.”

The guild's members include all levels of skills. “We have beginners to experts,” Keppers said. “We have a lot of really talented people here.”

Nelson said, “That's why the sew-ins are so important because when you are around somebody who is a little more talented and you are stuck on something, quilters like to help.”

At the September meeting, the group did not have an outside speaker, but two of the members offered “show and tell” projects that they are working on. Gloria Waisenen shared blocks from a Fourth of July quilt she learned to make at a workshop in Alaska.

Mullenix showed the blocks of baby animals that will become a quilt for her new grandchild. Mullenix started quilting after her children were grown. “I took lots of classes, continue to take lots of classes,” she said. 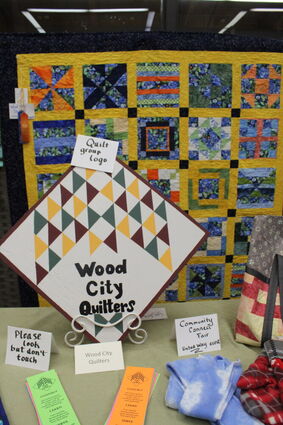 Wood City Quilters members got some display space with the public at the Cloquet Public Library open house last month.

Even though the actual process of quilting does not resemble those long-ago quilting bees, it is apparent that the heart and soul of those gatherings remain.

“Quilters are happy people,” Keppers said. “Playing with fabric is our thing.”

The Wood City Quilters continue to connect, learn, and serve as they piece together their own community.

Wood City Quilters meets the second Wednesday of every month at 6 p.m. at the Cloquet Library. For more information, email [email protected] or find them on Facebook.