At 20-6, Cloquet looks to keep rolling 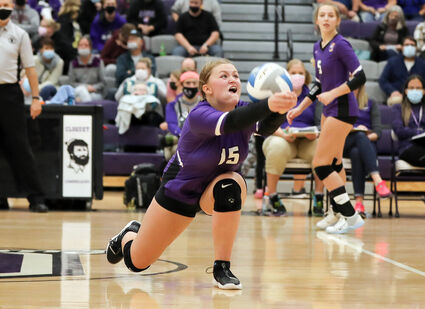 Cloquet ninth-grader Ella Maslowski goes to the floor for a dig during Monday night's volleyball match with Duluth Denfeld in Cloquet.

Five words - "we're excited for the playoffs" - shows the excitement and kind of season the Cloquet volleyball team has had thus far. With a gaudy 20-6 record, the Lumberjacks are in rarified air when it comes to Cloquet volleyball.

"We have a group of four seniors - Emerson Rock, Brea Rasmussen, Geneveve Fonoti and Laura Hecht - that all have three or more years of varsity experience," said longtime coach Heidi Anderson. "We also have a group of hard-working underclassmen."

That mixture of talent has given fits to opposing teams all season. Over the last seven games, the squad has gone 6-1, including a Monday night victory over Duluth Denfeld. The 'Jacks beat the Hunters 25-14, 25-9 and 25-13 to take the home victory. And as if to prove their mettle even more, the Cloquet girls downed Hermantown on the road to win the Lake Superior Conference Championship Tuesday.

"We have made it through the grind of the season playing three weekend tournaments in a row and traveling to a string of away games," Anderson said. "We have some tough section opponents down the stretch and the key is to stay healthy and injury-free. We had probably our strongest performance of the season against Proctor, perhaps followed by our poorest performance of the season against Grand Rapids. It's now time to regroup and refocus and finish what we started."

Last Tuesday the Lumberjacks downed a very good Proctor team 3-1, a team that was 15-4 up to that night. Then on Thursday of last week they fell to Grand Rapids 3-0 without Rock, their stalwart setter. However, the 'Jacks bounced back Monday with an easy and convincing win over Denfeld in a game that saw Ava Carlson pound down 12 kills while Aili Buytaert and Geneveve Fonoti added six kills. Still without Rock, Carly Johnson and Ella Maslowski helped lead the offense with 16 and 12 set assists respectively.

As of Tuesday night, the Lumberjacks were in a fierce fight for playoff seeding with three other schools for the top four slots in Section 7AAA.

"Our final QRF ranking will depend on how we finish the last regular season game," said Anderson. "We are close in points with Grand Rapids, Hermantown and North Branch for the No. 1 through No. 4 seeds in Section 7AAA."

On Tuesday night, the Lumberjacks needed a win to capture the Lake Superior Conference championship, and that is exactly what they got on the road in Hermantown, beating the Hawks 25-21, 25-17, 24-26 and 25-22. 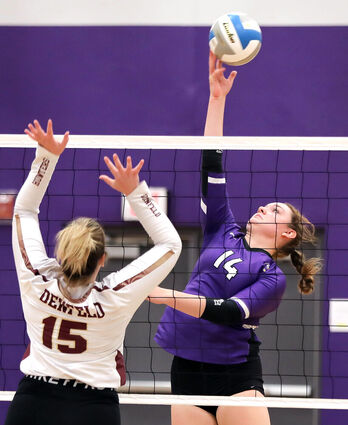 Against Hermantown, the 'Jacks had four players with double-digit kills. Both Ava Carlson and Blythe Proulx had 13 kills while Geneveve Fonoti and Brea Rasmussen each had 10 kills. Aili Buytaert finished with nine kills. The 'Jacks also got impressive efforts from Carly Johnson who had 41 set assists and 19 digs, while Quinn Danielson was amazing in the back row with 25 digs.

"Sue Wasbotten runs a strong program at Hermantown, and we have had some big battles over the years," said Anderson. "To go to their place and have an all-around solid team performance that we did was a great way to end our regular season to get win No. 20 on the road at Hermantown."

All in all, Anderson is pleased with the season so far and is excited about the upcoming playoffs.

"I've been working with these players in various capacities since they were in fourth through sixth grade," Anderson said. "This season is a culmination of all their efforts over the years. They remind me a lot of the team I coached back in 2013 or 2014 that made it to the section final in terms of work ethic, volleyball IQ, team culture and love of the game. I think we still have our best volleyball ahead of us."