It's a super playoff Saturday slate 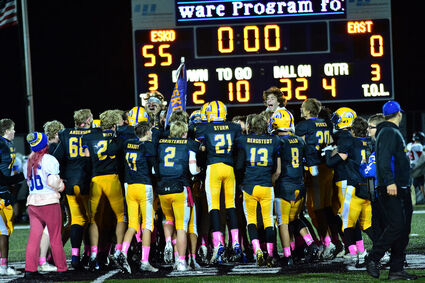 Esko got a signature win against Duluth East to close out its regular season last week. It is a favorite in the section playoffs. The Eskomos are 8-0 and face Rock Ridge (formerly Eveleth-Gilbert and Virginia) on Saturday.

As Minnesota rushes into postseason football, two Carlton County teams look like contenders to make a state run. Esko in Class AAA and Moose Lake/Willow River in Class AA both have gone undefeated this season and are favorites in sectional play.

In Section 7AAA, the Eskomos finished the season 8-0 and allowed a total of only 34 points in those eight wins. In fact, the Eskomos shut out five of their eight opponents, including a Class AAAAA Duluth East team in the final game of the regular season, a game Esko won 55-0.

"The regular season went well," said Esko coach Scott Arntson. "We put ourselves in a good position to get a first-round bye, and that is always important."

Esko will host No. 4 seeded Rock Ridge at 2 p.m. Saturday.

"Against Duluth East, our defense played well and we finally had closer to a complete game on both sides of the ball," Arntson said. "Like always, there are things we need to clean up - especially if we get in that final game."

If the Eskomos make the title game it would be most likely against Aitkin, which garnered the No. 2 seed, a team that Esko beat 14-12 on Oct. 14. Aitkin faces Two Harbors Saturday for the right to play in the title game.

"They are a good team and if we get that far we'll need to be ready to play," Arntson said about Aitkin. "On defense they are very athletic, they are quick off the ball. They are strong, tough kids who are extremely well-coached."

Perhaps the best regular season in northern Minnesota this year was posted by Moose Lake/Willow River. The Rebels manhandled opponents as they steamrolled to a 6-0 record while outscoring their opponents 272-21. In fact, since the Rebels defeated Hermantown 28-21 in their opening game Sept. 3, they have not allowed another team to even score.

"It is always great to go undefeated in the regular season, but that is never the goal of Rebels football," said ML/WR coach Dave Louzek. "Our focus on the regular season is to get better each week in preparation for the playoffs."

"Our defense has played very well and our ground game on offense has been very physical," said coach Louzek. "I feel our team is in a good place right now and very excited to start the playoffs."

Despite being the overwhelming favorites in the section, Louzek is not concerned about his team overlooking any of their opponents.

"We will be well-prepared for any opponent we see in the playoffs, with the focus being on that team and making sure our players are not looking ahead past anyone," Louzek said. "Entering playoffs, our goal is to win the Section 7AA championship because it is that win that gets you into the state tournament and an opportunity at being state champion."

In nine-man action, both South Ridge and Cromwell-Wright will open play Saturday against each other in Culver.

No. 2 seed South Ridge comes into Section 5 play with a record of 3-4, while the Cards are also 3-4 and received the No. 3 seed. A month ago the Panthers defeated the Cards 32-12 in Culver. Saturday's game starts at 7 p.m.

The only other local team which would be playing this year is the cooperative program of Carlton/Wrenshall, except the Raptors season was derailed by Covid. 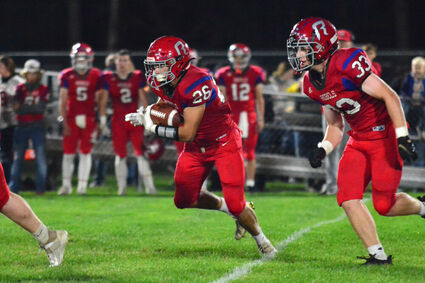 The Raptors struggled to a 1-3 record with their last game on Oct. 8 in a loss to Ogilvie. Last Wednesday, the Raptors were finally scheduled to play Cromwell-Wright, but that game was just one of many games that were canceled this season due to Covid illnesses or exposures.

"That was our fourth regular season game canceled as a result of this, and if you count the playoffs, five," Raptors coach Jeremy Zywicki said in an email to the Pine Knot last week.

The Raptors also struggled with numbers, so that made if even more difficult to continue when Covid cases kept popping up.

"We only had 11 players this season, so that makes it tough when something like this happens," said Zywicki.