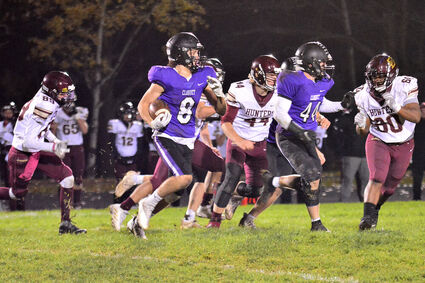 Cloquet's Deeken Fjeld looks for a block from Carter Horvat (44) on a carry for a first down during Tuesday's playoff game against Duluth Denfeld in Cloquet. The Lumberjacks play Saturday in the second round at North Branch.

The Cloquet football team opened play in the Section 7AAAA at home on Tuesday night against Duluth Denfeld, a team Cloquet defeated 42-6 on Sept. 10. After giving up the first touchdown of the game, the Lumberjacks bounced back and pulled away to a 34-12 victory.

"I was proud of how the guys responded after we fell behind," said Cloquet coach Tom Lenarz. "When you get to the playoffs it can come down to which team wants to keep playing football together, and I think our guys showed they don't want it to end."

Denfeld scored on a 79-yard touchdown run from Dashaun Moore on their very first drive of the game to go ahead 6-0. However, the Lumberjacks answered back with the hard running of fullback Marshall Hayes, who eventually scored on a 3-yard touchdown plunge with 2:06 left in the first quarter. Dayne Painovich booted the extra point giving Cloquet a 7-6 lead.

"It was nice to have Marshall back in the lineup and healthy again," Lenarz said. "It's the first time he's been healthy in three weeks and we felt good about being able to attack them inside. He is not a runner that will get a lot of long runs, but he is so quick inside and always seems to find the right hole and he did that, especially in the first half tonight."

Early in the second quarter, the Lumberjacks went up 14-6 on a 4-yard touchdown run by Hayes and the extra point boot by Painovich.

The Cloquet defense began to exert pressure on the Hunters, creating turnovers and stops, allowing the offense to get back on the field.

"Our defense has taken a lot of hits and we've lost a lot of guys to injuries," Lenarz said. "We've got a lot of guys playing who were not starters at the beginning of the year who we are relying on now."

Midway through the second quarter, the Lumberjack passing game kicked in as quarterback Alec Turnbull found Painovich streaking across the field for a 25-yard touchdown strike, making it 21-6 after Painovich knocked through the extra point.

Denfeld reacted with a 29-yard touchdown pass of their own on the last play of the first half when quarterback Kaden Postal hit Dom Brennan in the corner of the end zone, cutting the lead to 21-12 at halftime.

Turnbull and Painovich connected for a third-quarter touchdown pass that covered 28 yards in the third quarter, pushing the lead to 27-12.

"I thought Alec (Turnbull) had a good game, and made some really good decisions with the ball," said Lenarz. "I also thought he threw the ball well and Painovich had a good game for us as well."

Hayes scored his third touchdown of the game on a 2-yard plunge with 5:55 remaining in the game. Painovich added the extra point kick for the final score of 34-12.

Cloquet piled up 300 yards of total offense with 206 yards on the ground. Hayes led the 'Jacks with 88 yards rushing; Turnbull was 4 of 5 passing for 94 yards and Painovich caught two passes for 53 yards.

The win was the 100th as head coach for Lenarz. 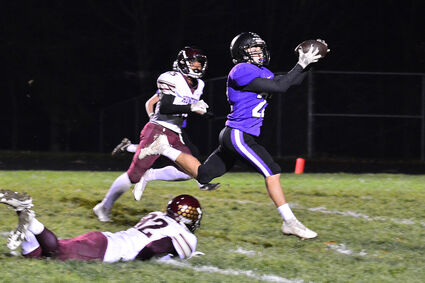 Dayne Painovich makes a catch and takes it to the end zone for a touchdown Tuesday as the Lumberjacks downed Denfeld 34-12.

"It isn't about me, it is about the program and the coaches," Lenarz said. "The first three or four years were pretty lean and we struggled to find wins. Guys like Jeff Ojanen, who's been with me since Day 1, and the other assistants deserve a lot of credit as well as the principles and ADs who stuck with me when we first started."

The fourth-seeded Lumberjacks now have the tough task of taking on top-seeded North Branch in North Branch at 7 p.m. Saturday. The Vikings defeated Cloquet 49-12 in the last regular season game of the year on Wednesday, Oct. 20.

"Well, obviously we will need to play better than we did last week," said Lenarz of the loss to North Branch. "I think having Hayes and Reese Sheldon back on offense will help us on that side of the ball. If we can stay disciplined on the defensive side of the ball and keep the ball away from their offense, maybe we can frustrate them. Of course, we need a little bit of football luck, too."

Tuesday's win improved the 'Jacks to 5-4 on the season.