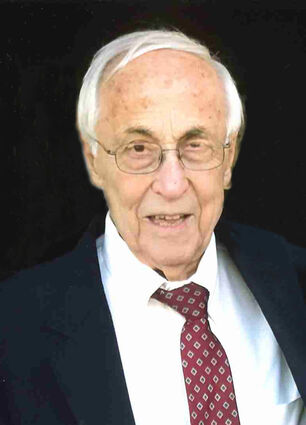 George Joseph Legueri, 91, passed away due to a stroke Nov. 3, 2021, at Essentia St. Mary's Medical Center in Duluth. He was born at home in Nashwauk on May 1, 1930, to Fred and Mary (Strafacie) Legueri. George attended the Nashwauk elementary school and graduated from Nashwauk High School in 1949, where he was an outstanding football player with fabulous leg speed - he was very hard to catch. Following high school, he enlisted in the Air Force and served for four years, much of it in Korea. George always said, "I was proud to serve my country."

After the military, he attended Bemidji State College, where he earned a bachelor of science degree in teaching. He went on to earn a master's degree, which gave him a license to teach and work as an administrator. George taught in the Cloquet school district and also coached football. Later, he was hired by the Carlton school district, where he served as the principal until his retirement.

On Aug. 27, 1959, George and Alice (Jahnke) were married and made a life in Cloquet, living in a beautiful home. Their goal was to "make guests comfortable." After retiring, they wintered in Green Valley, Arizona and spent time visiting relatives in Parkers Prairie and in northern Minnesota. Also during retirement, George took art classes in drawing and drew some fantastic pictures, giving them to family and friends as gifts. He was interested in fishing and was an avid golfer too. His motto to make a happy life was to "keep a positive attitude" and "keep a sense of humor."

George was preceded in death by his parents; his loving wife, Alice, who passed five days before him; his brothers, Angelo (Dorothy), Benny (Winnie), and Louis (Elaine); sisters, Josephine "Pina" (Harold) Pakkonen, Carmen (Rey) Lakso, and Elizabeth "Tootsie" (John) Sweeney. He is survived by 14 nieces and nephews, many great neighbors, and friends. George would like to convey a special thank-you to all his neighbors who helped him over the years with the lawn care and snow removal.

Visitation: 10 a.m. until the 11 a.m. Mass of Christian Burial Saturday, Nov. 6 at St. Francis Catholic Church in Carlton. Military honors will be presented by Nicholson-Sellgren VFW Post 2962 of Carlton. A lunch reception will follow in the church social hall. Burial will follow in the Nashwauk Cemetery. In lieu of flowers, please send a memorial gift to the charity of your choice. Nelson Funeral Care assisted the family with the final arrangements.