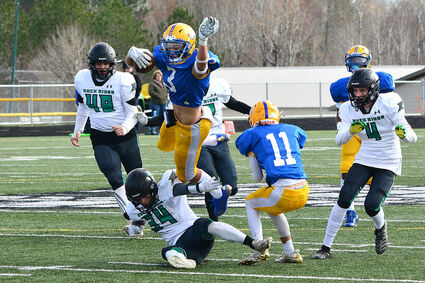 The Esko football team is loaded with speed, talent, and power. All three of those elements were on display Saturday as the Eskomos blasted their way to a 43-14 win over Rock Ridge in Esko in the Section 7AAA semifinals.

The first quarter had one explosive play when quarterback Ty Christensen hit Mason Perich for a 40-yard touchdown pass, giving Esko a 6-0 lead after the missed extra point.

Esko tacked on two more touchdowns in the second quarter as they pulled away to a 21-0 halftime lead. The first score was a Braden Lowe 3-yard touchdown run and the second was a 37-yard touchdown dash by Mason Perich. The Eskomos also added a two-point conversion run on Lowe's score and a Wyatt Stankiewicz extra point kick on the touchdown by Perich.

"We also got inside the 5-yard line two other times in the first half and didn't score," recalled Arntson. "In the second half we focused on trying to clean up some of our offensive mistakes."

Cole Engen ignited the crowd when he intercepted a pass and returned it 10 yards for another score, making it 28-0 after the extra point kick by Stankiewicz.

Rock Ridge answered quickly, scoring on a 55-yard run, but Esko struck equally fast before the third quarter ended when Nolan Witt raced 46 yards to pay dirt. The Eskomos went back up 36-6 after a two-point conversion run.

Early in the fourth quarter, Rock Ridge notched its second score of the game on a 1-yard touchdown run, but Esko responded in kind when Joey Antonutti slipped in from a yard out and Stankiewicz booted the extra point, pushing the lead to 43-14.

"We had six different people score for us," said Arntson. "The main thing we worked on was running our base offense better and continuing to improve." 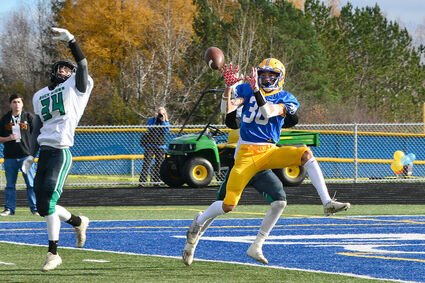 The win put the Eskomos into the Section 7AAA championship game Thursday against Aitkin, a team that Esko slipped by 14-12 on Oct. 14.

"It will be a good test for us," said Arntson. "They are strong and they are very physical at the point of attack. They brought it to us in the first game. They come right at you, and they don't trick you, they basically smash you and we need to be ready for that."

A big key for Esko is their speed and athleticism. They had to take advantage of that against the Gobblers at UMD's Malosky Stadium.

"It is going to be a tough game with two evenly matched teams," Arntson said. "We will need to get our athletes in space and let them use their ability and just go out and play."